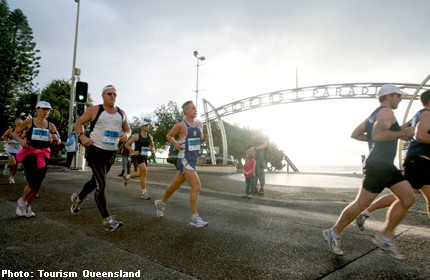 Runners going past Surfers Paradise during the Gold Coast Marathon, which has become a hit with Singaporeans with its cool climate, flat terrain and superb coastal scenery.

Running enthusiasts have also been packing their running shoes along with their board shorts and bikinis for the coast in increasing numbers in recent years.

They range from elite runners looking to qualify for major marathons and the South-east Asia Games, to virgin marathoners with their families in tow.

The marathon has grown quickly since Tourism and Events Queensland, the tourism body for the Australian state, started promoting it in 2008, when it had just 36 sign-ups from Singaporeans.

This year, the Republic's runners formed the third-largest foreign group among the nearly 28,000 runners, after Japan and New Zealand.

So popular has the marathon become that travel agent Scenic Travel customised a tour package three years ago to cater to runners. The tour group has grown from 80 in the first year to 140 this year, partly thanks to low-cost airline Scoot introducing a direct flight last year.

Elaine Foo, 40, manager of outbound tours, said: "When we started, we didn't know people were so fanatical they would pay to go and run overseas."

The agency is now looking at organising tour groups for other marathons.

The dry, cool climate, flat terrain and coastal scenery all combine to make the Gold Coast marathon a hit with Singaporeans, many of whom use it to clock their personal best times.

Held every July, the temperature ranges from 10 to 20 deg C. The destination is also a manageable seven-hour plane ride away.

"If you talk about race experience, Gold Coast is one of the nicest," said Anthony Sum, 49, founder of the 800-strong running group Team FatBird. Seventy of them ran at this year's race. FatBirder Cheryl Chan took part as she wanted to try running in a different climate. The 40-year-old customer service manager did a personal best time of 4hr 45min 51sec, an improvement of 16 minutes from her previous best at Singapore's Standard Chartered Marathon.

"The cheering and support from fans and Australians along the way helped a great deal, especially in the last 12km. They would even call out your name, which is on your bib. That was very heartwarming," Chan said, adding that she plans to return.

"It is very well-organised, and doesn't have bottlenecks," said the 34-year-old food technologist.

National marathon record-holder Rameshon Murugiah, however, rates it seven out of 10, saying: "The weather can fluctuate and people were fighting for water at the water points. You had to stop."

Singapore's oldest marathoner Kor Hong Fatt, 81, was also there, making it his 18th marathon and him, the oldest runner in this year's full marathon.

Ning Wen Long, 36, chairman of the Safra Mount Faber Running Club, said that Gold Coast has become one of the regular fixtures on his team's running calendar.

The "resort feel" makes for a much more pleasant running experience, compared to the highly urban Hong Kong marathon, he said.

He was among the five Singaporean men who came in under three hours for the 42.195km race in Gold Coast with his official time of 2:58:03.

Singapore's top female performer was Sumiko Tan, who came in at 3:26:53.

This year's marathon was dominated by the Japanese, who took the men's first and second places and the women's top spot.

Cameron Hart, general manager of marathon organiser Gold Coast Events, said the plan is to get the marathon an International Association of Athletes Federations gold label in the next two years.

That will certify it as a well-organised, world-class event with proper attention paid to its runners' health and safety, among other things.

But it has no ambitions to become a world major marathon in the vein of Boston, New York or London, said Hart.

"We consider ourselves a 'resort marathon', along the lines of Honolulu, but we will not stop looking to improve our standard of event delivery and service to our runners," he said.

He acknowledged that the race is not likely to attract the world's top 10 runners given the high cost; the idea is to entice up-and-coming international runners who will use it as a launching pad to bigger races.