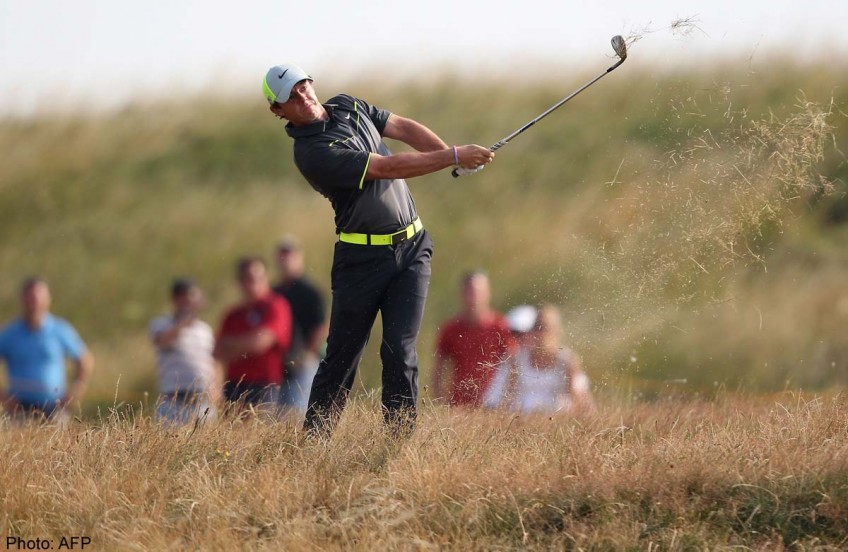 HOYLAKE, United Kingdom - Torrential rain drenched the third round of the British Open at Royal Liverpool on Saturday as Rory McIlroy prepared to defend a four-stroke lead.

The idea was to cut in half the time needed to complete the third round, thus clearing the way for an on-time finish Sunday when the forecast was better.

The tricky conditions gave hope to some in the field who have watched an imperious McIlroy dominate the first two rounds of an Open.

Two rounds of 66 have left the 25-year-old Irishman at 12 under and four strokes clear of his nearest challenger, American Dustin Johnson, whose 65 on Friday was the best of the tournament so far.

The rest of the field are at least six strokes back as McIlroy hones in on what would be his third major title, but first on British soil.

The world number seven said that he was unperturbed by the prospect of bad weather and that he had practiced for Hoylake with a links-type of golf in mind.

"And in a way having that four-shot lead isn't a bad thing, because it makes it tougher for the guys to catch you.

"Whatever the weather is tomorrow I won't mind and just try and play another solid round of golf."

McIlroy was due out at 11:01am (1001GMT) in the company of Johnson, the big-hitting American who has yet to win his first major at the age of 30 despite several close calls, notably at the Royal St George's Open three years ago when the weather was equally bad, and Francesco Molinari of Italy.

Up ahead, and all six strokes adrift of McIlroy will be a crowd-pleasing trio of Sergio Garcia, Rickie Fowler and Ryan Moore, with South Africans Louis Oosthuizen, Charl Schwartzel and George Coetzee in front of them.

World number one Adam Scott was nine shots back, but still sounding confident he could claw his way back into contention for a first win in the British Open, while Justin Rose and defending champion Phil Mickelson were needing to shoot low in the 60s to have any chance.

The same could not be said for Tiger Woods, who edged into the weekend's action with a birdie at the last on what is just his second tournament since back surgery in late March.

A whopping 14 shots adrift, Woods admitted he had little chance of being in contention come Sunday, but just making the cut has been an achievement in itself for the 38-year-old American as he tries to resurrect a career blighted by injuries.