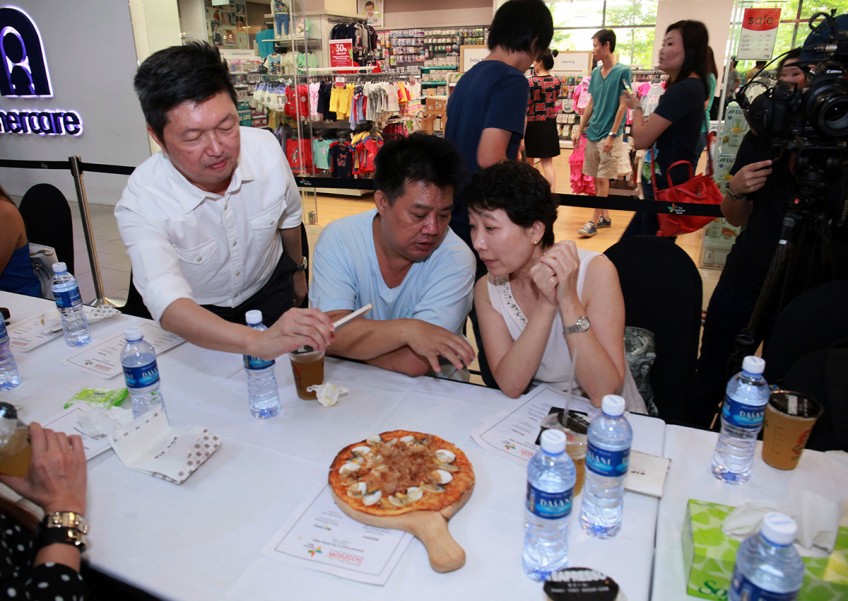 They were the winners of the SoShiok Feast, a contest organised by the mall, located in Sengkang West Avenue, and The Straits Times SoShiok app, which allows readers to read food news and reviews.

The contest ran from July 31 to Aug 9 and received 300 entries from app users.

With a slate of signature or special items from 13 eateries within the mall, and cuisines including Korean, Thai and Japanese, some of the winners employed strategies to survive the experience.

"We are going to drink less water and eat less carbs," said housewife Esther Tan, 60, who attended with her daughter.

Some skipped breakfast, while many others bravely said they would they would take on the challenge of trying everything, even as they perused the menu somewhat nervously.

"Honestly, I am overwhelmed by the amount of food. We're thinking of what we can possibly dabao," said a nervous teacher, Ben Wong, 45, using the local slang for take- away food.

Still, they were all smiles as they tucked into the food - many of them are self-confessed foodies who enjoy traversing the island to find good food and are game to try new flavours.

Mr Ong Beng Hock, 53, who is self-employed, said: "We get to try various types of food from different restaurants. Otherwise, we would not have had the chance to go to each restaurant one by one."

Besides food, good conversation and new friendships were also on the menu for the day.

The foodies were spotted snapping photos and trading stories with one another, along with Life staff Mr Wong and Ms Tan.

"It was great fun feasting with a group of dedicated foodies. The tenants of The Seletar Mall pulled out all the stops. What they served was great," said Ms Tan, 47.

New French-Japanese-Thai restaurant Three By Table Concept, which served its signature claypot crayfish noodles, a crowd favourite, was pleased with the response.

Its brand consultant, Ms Jane Tan, 40, said: "We hope this event can raise more awareness among people about the mall, to let them know that there's a food paradise here."

A joint venture between Singapore Press Holdings and United Engineers Development, The Seletar Mall, which opened in November, boasts 48 eateries.

After the event, many praised the organisers for allowing them to take home some of the food that they could not finish.

"We went home with more food than what was in our tummies," says student Tisa Iryawan, 21, who attended with her father.

"I'm going home to take an afternoon nap, and I think there'd be no dinner for us."

But foodies being foodies, some could not resist buying more food home from the mall. In particular, the chilli crab buns from bakery Swee Heng Classic 1989 were a hit.

"We went to the bakery to get more buns to take home. It was the first thing we ate this morning and we really enjoyed it," said student Abigail Tan, 22, who came with her mother. "I may get hungry later."

This article was first published on August 17, 2015.
Get a copy of The Straits Times or go to straitstimes.com for more stories.

The Straits Times SoShiok app can be downloaded free at the Apple App Store and Google Play Store. Feedback can be sent to soshiok@sph.com.sg