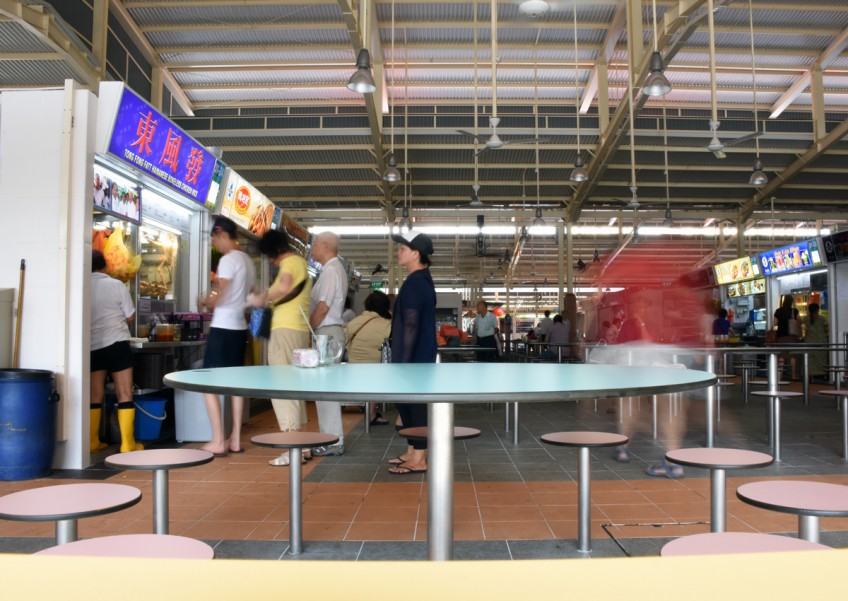 SINGAPORE - No more schlepping over to the temporary digs near the bus interchange only to find the char kway teow man is not there.

Ghim Moh Market and Food Centre is back - with many original stalls among the 72 - to the cheers of residents in the area.

Re-opening on Tuesday after about a year and a half of renovations, the centre at Block 20 Ghim Moh Road has been scrubbed clean of years of grime and boasts wider walkways and better ventilation.

The National Environment Agency (NEA) said upgrades included replacement of tiles, improvements to the toilets and modifications to the roof for better air flow.

Residents and stall owners told The Straits Times they were happy about the upgrades and relieved their haunt seems like its old self.

Mr Loke Koi Choon, 62, the owner of Jiu Jiang Shao La for the last 20 years, said: "It used to be very stuffy especially on hot days but now it's so much better. Even better is that it still looks like it always had."

The food centre, which draws residents and workers from nearby Holland, Bukit Timah, Clementi and Buona Vista, is popular for stalls such as Jiu Jiang Shao La, a roasted meat stall, Ghim Moh Chwee Kueh, and Mohamed Faisal Seeni Eating House, a prata shop. These have all returned.

As of March 1, subsidised stall owners will have to pay a monthly fee of $192 while non-subsidised owners pay up to $1,400. Those who pay the subsidised rate were the original hawkers relocated to Ghim Moh in the early 1970s.

Mr Lew Chin Loke, the 55-year-old owner of Alexandra Village Avocado Fruit Juice, said: "I have worked at this stall for about 30 years, ever since national service. Ghim Moh is the only place I will ever work and I don't plan on stopping."

Before its renovation, the food centre also made news for its rat problem. None has been seen, however, since a 10-day pest control exercise saw 163 rats caught in 2014.

"The market is a lot cleaner than before and I believe that there won't be a rat problem any more," said Mr Tan Kheok Tee, the 61-year-old owner of Heong Huat Fishball Noodles.

They are also happy that business will pick up again, thanks to customers like 20-year-old undergraduate Kodi Ko, who said: "I've been eating prata here since I was four, but during the renovation, I rarely went to the temporary centre, which was cramped and stuffy."

Customers were happy prices remained the same. A check with 10 stalls found none making changes.

"If there's no need to increase prices then I won't. I want my customers to be happy as well," said Mr Ng Hock Lye, the 64-year-old owner of Hock Lye Noodle House.

At least one new stall used to be an old one. Madam Chee, 67, ran a duck rice stall with her late husband, but found it hard to continue alone. Now she has started a pancake store, Ong Pancake, with her daughter, Madam May Ong, 42.

And at least one old stall which called it quits years before has come back. Mr Yap Yew Kok, the 77-year-old owner of Lao Chao Zhou, a nasi lemak stall, opted to rent the space out to a hor fun stall 20 years ago.

But a change in rules allowing only original owners to continue operating after the revamp prompted him to set up his old nasi lemak business rather than sell his space.

Mr Yap said: "I've received three offers to sell but I've never even considered selling before and will never sell."

This article was first published on March 3, 2016.
Get a copy of The Straits Times or go to straitstimes.com for more stories.