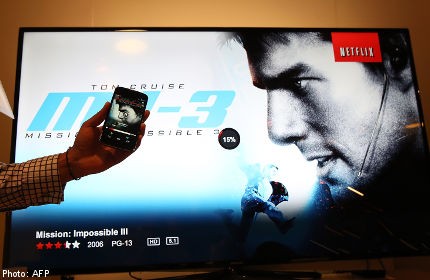 By now, you most likely might have heard about Google's latest release, the Chromecast, announced along with the second instalment of the Nexus 7 last week.

And if you have heard about it, you would probably know one thing its US$35 (S$44) price tag. Right now, Google's Chromecast is already sold out state-side in all major online and traditional retail outlets. Technology works best when it's cheap and good, so again and again, Google's low-cost offerings will likely do well.

Its competitors, two other streamers being the Apple TV (US$99) and the Roku LT (US$50), cost a lot more and is essentially doing the same thing streaming your online content to your HD TV.

What is the Chromecast? It's basically a USB-sized dongle that plugs into your HDTV; much like the previous pocket PCs that I've featured in this column.

However, it doesn't turn your HDTV into a Smart TV. The dongle connects via HDMI, and a power source is required, either via your TV's USB port, or you connect it to a wall power source. From there, you click on a button on the tiny Chromecast, connect to the Wi-Fi network which is configured either using a browser or a mobile application, and you can start streaming away.

Right now, there are only four compatible applications for Android to work on Chromecast, but that figure will balloon really quickly. So at this point, your mobile device, be it Android or iOS, and even on any laptop on a Chrome browser, becomes a remote control for the TV.

I like how Google always makes compatibility not just with Android devices, but with the second largest mobile operating system, Apple's iOS, as well.

How does the Chromecast work? While streaming YouTube, Chromecast doesn't take content from your mobile device, but it gets it directly off the cloud. So when you are watching a video, your mobile device is free to operate another application or you can continue to browse the Internet. In paid apps, users can also stream Google Music, Google TV and Movies, along with subscribers to the ever-so-great online TV Netflix.

Those without Netflix can still stream their content through Google Music or TV (wherever they gotten their content from). So the truth is you don't really need a smart TV, you just need your TV to be a display for your smartphone. Essentially, that's what most people want, isn't it? To be able to access mobile content on a much larger screen once or twice a day, or when sharing with multiple users. So Chromecast, for US$35, has immediately become a cheap alternative to a 40-inch $1,000 Smart TV. That is, if you can get your hands on one.

In short: Many Bruneians who YouTube nonstop would like to view their content on a larger screen. But, having a fast enough Internet connection is always a challenge. With the cheapest Fibre-To-The-Home (FTTH) connection, I can confidently say that at 480p on YouTube, you will face little to no waiting time.

You will still need to wait a little with 720p and 1080p, and because I personally think that at 480p you get decent enough quality, the Chromecast (if you can get it below US$50) will be a nice addition to your television set-up.

Because of its portability, you can easily transfer it to whichever TV you want, and immediately start browsing while on Google's Chrome Browser on your laptop, or any Android and iOS device.