Hackers 'not likely' to be behind MessageMe spam 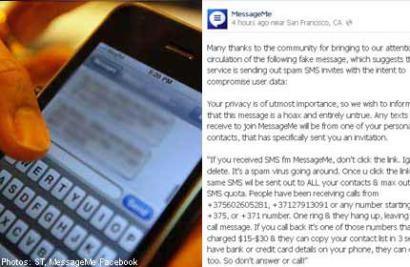 Hackers are unlikely to be behind the flood of spam SMS invites sent out by the MessageMe application, experts say.

Instead, it seems to be a case of a young start-up trying to attract more customers in a bid to match mobile messaging leaders such as WhatsApp and Facebook.

When users install the five-month-old app, it automatically messages all their contacts and asks them to join, said Mr Wahab Yusoff, vice-president of security firm McAfee South Asia.

This could have caused the barrage of texts that provoked complaints on Singapore technology forums and social media platforms on Monday.

The SMSes come with a link that sends users to the app's iTunes store or Google Play page.

"While the messages and links seem legit, it looks like it's a case of a badly written app that messages a user's contact lists for the benefit of building a user base," Mr Yusoff added.

But Mr Terrence Tang, regional director for digital marketing and consumer business at Trend Micro, does not rule out the possibility that someone is up to mischief.

He said users may have unwittingly installed a "fake" version of MessageMe, sending out SMSes without consent. And the fact that some appear to have received invites from strangers means it could be the work of cybercriminals who gather or buy mobile phone numbers.

Telcos SingTel and StarHub have blocked all SMS invitations from the app. A SingTel spokesman said it took the "precautionary measure" after detecting "a surge in SMS traffic from MessageMe's servers overseas". M1 said it is investigating and may also block the texts.

MessageMe has declined to comment, despite repeated requests by The Straits Times. But the United States-based firm has dismissed a widely-circulated SMS that warns users of a "spam virus", calling it a hoax.

It issued a statement on its Facebook page, saying: "Your privacy is of utmost importance. Any texts you receive to join MessageMe will be from one of your personal contacts, that has specifically sent you an invitation."

It said allegations that it was trying to compromise people's data were "entirely untrue".

Some users told The Straits Times they were no longer receiving the spam invites. Warehouse manager Eugene Lim, who got more than 300 SMSes from MessageMe on Monday, said: "It has stopped. Maybe they know they screwed up and fixed it."

Do not reply to unsolicited SMSes, including those from telemarketers or unknown sources.

Be wary of shortened URLs. They could lead to dangerous websites. Use a URL preview site, such as LongURL, to check if the web address looks legitimate before visiting it.

Install a mobile antivirus programme or an SMS blocker. Norton by Symantec, Trend Micro and McAfee all have SMS blockers which filter text messages from unwanted numbers.