Halal fare a draw at Food Of Asia fair 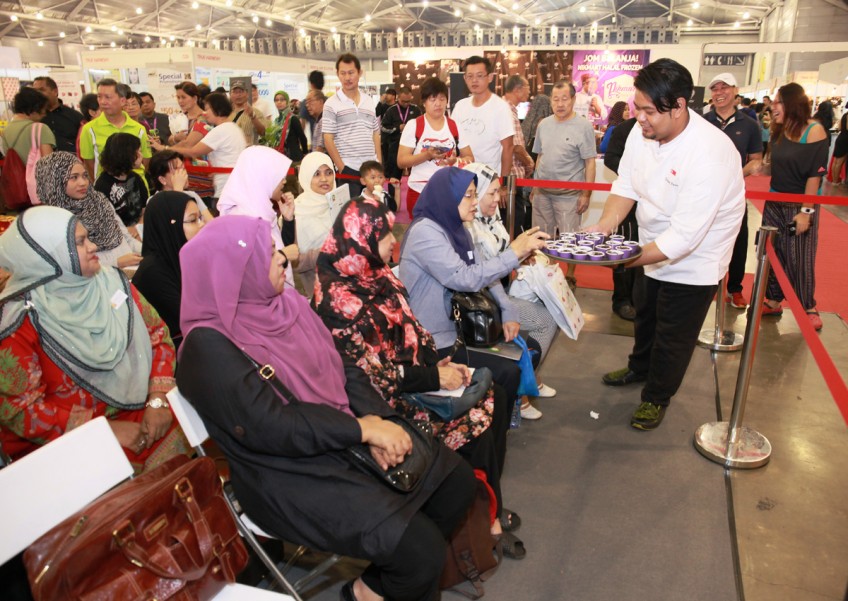 Churros, nasi ambeng and dendeng, or slices of barbecued meat, were some of the halal food items available at the three-day Food Of Asia exhibition at the Singapore Expo, which ended yesterday.

This year, halal food was a focus for the first time at the fair organised by Sphere Exhibits, a wholly owned subsidiary of Singapore Press Holdings.

Thirteen of the 86 exhibitors were halal establishments. They featured a diverse range of food for sale, from Turkish ice cream to Malay nasi padang and Italian lobster pasta.

There were also cooking demonstrations from chefs such as Dato' Fazley Yaakob from Malaysia and Singapore chefs Violet Oon and Devagi Sanmugam.

When Life visited the fair last Saturday, there was a steady stream of people attracted by the offerings and events.

Its organisers said the fair attracted about 50,000 people last Friday and Saturday.

Housewives Quraisha Begum Abdul Rahim, 55, and Noresah Ramly, 42, went to the fair for the demonstrations.

Madam Quraisha said: "We love to cook and came here to learn from the chefs. Coming to food fairs also keeps us busy."

Dato' Fazley, who is also an actor, singer and winner of Malaysia's Celebrity Masterchef, applauded the efforts of the organisers to introduce a halal section.

He said: "It's a wonderful idea. I also get more exposure to a non- Malay audience."

Echoing his sentiments was Mr Azhar Sulaiman, 29, owner of dendeng business, Dendeng Duo, who chose to set up a stall at the fair to target non-Malays.

"In fact, I purposely stationed my booth close to (bak kwa companies) Bee Cheng Hiang and Fragrance," he said. "I have to admit that it was challenging. In the end, we still had more Malay than non-Malay customers. At least, we tried to fight it out alongside the two bak kwa giants."

Chef Jeremy Nguee was also thinking out of the box - he debuted his gourmet rempah (Malay spices) brand, Batu Lesong, at the fair. His stall sold halal pre-packaged curry and rendang pastes and BBQ marinade at $4 a packet or three for $10.

The ready-to-eat spices, which can be used for curries, marinades and salad dressing, are made without MSG, preservatives and palm oil and last for six months.

He said: "Halal is the future. I believe that South-east Asian cuisine - such as rendang and nasi lemak - will be the next big thing."

This article was first published on August 17, 2015.
Get a copy of The Straits Times or go to straitstimes.com for more stories.