A hard nut to crack for opposition unity 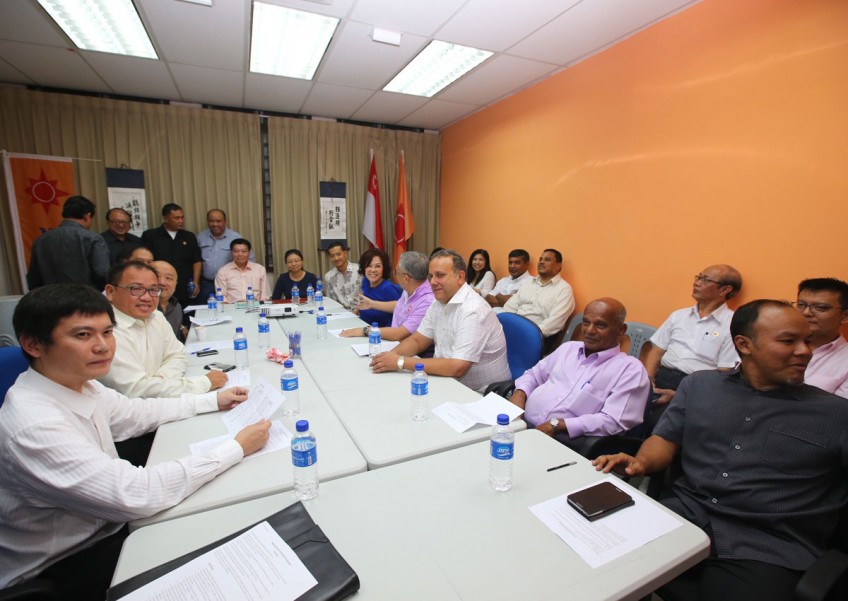 As opposition parties huddled on Monday night for a round of horse-trading to avoid the prospect of three-cornered fights, the mood was, by most accounts, positive and cooperative.

But as concessions were being made and differences ironed out, it emerged that one particular constituency was proving to be more intractable than the rest: Marine Parade.

About 30 minutes of the three-hour meeting was spent wrangling over the GRC but no agreement could be reached.

The National Solidarity Party (NSP) believes that having contested there against the People's Action Party (PAP) in the 2011 General Election, it should have first dibs this time around.

The WP also staked its claim. It argued previously that when electoral boundaries were redrawn, the GRC absorbed the Joo Chiat single- seat ward - where it lost in 2011 by a wafer-thin 388 votes.

But both arguments do not fully explain why the two parties are so keen to take on a constituency helmed by Emeritus Senior Minister Goh Chok Tong, the former prime minister, who remains popular among Singaporeans and who said on Facebook yesterday that he will likely stay and defend his seat.

In part, the WP has put into play its long-term strategy of expanding in the eastern areas by radiating out from constituencies it holds to adjacent wards. Geographically, Marine Parade GRC - and East Coast GRC which it contested in 2011 - fit the game plan.

With all the political buzz around Aljunied GRC in recent months, what is forgotten is that the PAP enjoyed a walkover there in 2001.

Then, in the 2006 election, came the WP, which garnered 43.9 per cent of the vote. Aljunied cemented its status as the hottest seat in 2011, and we all know what happened.

It is a mirror of the approach the WP took in East Coast. The party's foray there in 2006 saw it win 36.1 per cent of the vote.

Small wonder then that party and political analysts are watchful of the next contest in East Coast GRC.

The WP is clearly adopting a similar approach with its first move on Marine Parade GRC - bolstered by what it believes is the strong reservoir of support it retains from Joo Chiat's voters.

And while ESM Goh remains a strong ballast for support in Marine Parade for the PAP, he is 74.

And if the WP fails in its bid at the coming election, the party's strategy suggests it will be back again.

As for the NSP, the stand-off over Marine Parade must seem like deja vu: a flashback to the 2011 face-off over Moulmein-Kallang GRC.

The NSP offered to give way in 2011 if the WP fielded secretary- general Low Thia Khiang or chairman Sylvia Lim. But it then backed down and ceded the GRC despite there being no WP commitment to send in its top guns. Sources said the NSP took it as an affront when the WP eventually fielded what was effectively its "C" team.

That remains a sore point with the NSP. In its argument now with the WP, the NSP can also point out that its Marine Parade team in 2011 secured 43.4 per cent of the vote.

That both parties are walking the ground in Marine Parade, underscores their determination.

Who will blink first?

The WP, usually tight-lipped, has uncharacteristically signalled its intentions early and announced the areas it will contest in the general election, which is widely expected to take place as early as next month.

In 2011, it kept Singaporeans guessing until after the Writ of Election was issued. But its GRC win in 2011, followed by two by-election victories in succession, has given a fillip to its confidence.

And as the only opposition party with elected MPs in Parliament, its early announcement is a signal to fellow opposition parties to give it a wide berth in the five GRCs and five single-seat wards it is eyeing.

It went into Monday's meeting not to negotiate but to reaffirm its intentions. At that meeting, participants also took the unusual step of an informal vote on who should run in Marine Parade. The NSP received overwhelming support, sources said.

It was a move that led political commentator Derek da Cunha to ask on Facebook: "Do they think this is an episode of Survivor?"

He said that in the reality television programme, weaker contestants gang up and vote out the strongest player who is seen as a threat to their ambitions: "The parallels could not have been more striking with last night's meeting."

It is a view the WP no doubt shares. Monday's vote was a non-binding expression of sentiment and it is unlikely WP will be swayed into withdrawing. But its position could put a spanner in the works for the opposition's unity plan.

[[nid:212114]]
SUBSCRIBE TO OUR NEWSLETTER
Your daily good stuff - AsiaOne stories delivered straight to your inbox