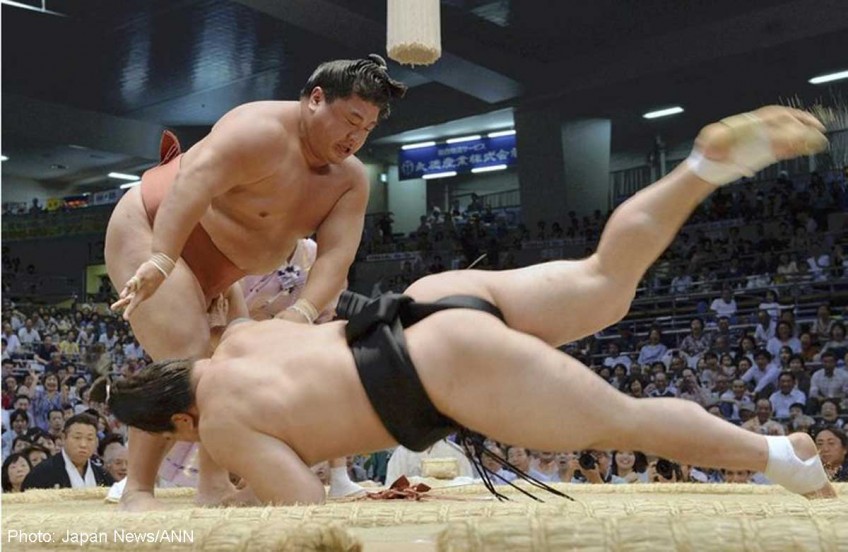 It would have been mathematically impossible for all three yokozuna to have remained undefeated at the Nagoya Grand Tournament, and it just so happened that Harumafuji lost earlier than expected on the fourth day on Wednesday.

Harumafuji was knocked off balance at the start by No. 2 maegashira Yoshikaze and was almost pushed out of the ring, but the yokozuna somehow recovered and stayed in the bout.

But then a zealous lunge at Yoshikaze's belt allowed the maegashira to push Harumafuji down to the dirt, leaving both wrestlers with 3-1 records.

In other action, yokozuna Hakuho was too much for spunky No. 2 maegashira Homasho.

The maegashira tried bravely to disrupt the yokozuna, but in the end, Hakuho just powered Homasho out of the ring, keeping his unblemished record intact.

Yokozuna Kakuryu also remained perfect, using a barrage of thrusts to the face of winless No. 1 maegashira Shohozan, who somehow managed to stay in the ring for a while before being overwhelmed and pulled down at the centre.

Ozeki Kotoshogiku got into a tussle with winless No. 3 maegashira Kaisei, eventually twisting him down to stay undefeated at 4-0.

The other ozeki, Kisenosato, also had a lengthy battle with a winless maegashira, but he proved the stronger as he moved No. 1 maegashira Ikioi along the edge of the ring before getting hold of his belt to push him out. Kisenosato improved to 3-1.

Popular No. 5 maegashira Endo lost his third bout, getting pulled down by No. 4 maegashira Takekaze right at the jump off.