He wants to known as the pioneer of ramen 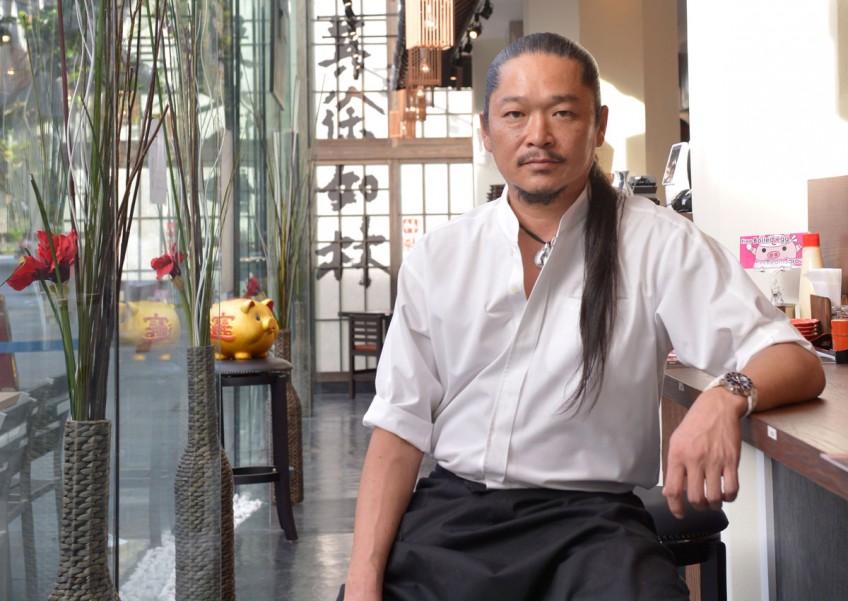 It is 6pm and a long line of diners snakes past a restaurant in Clarke Quay.

For the 20 diners in the queue, the wait can go up to two hours, especially on weekends, for a table.

In a country mad for Japanese food, Ramen Keisuke Lobster King is the hottest ramen joint in town.

The lobster flavour is in the soup, says restaurant owner Keisuke Takeda, 46.

He estimates that 20kg of lobster heads imported from France go into making 100 bowls of the bisque-like soup, which is simmered for at least six hours.

The restaurant serves up to 400 bowls of ramen a day, which come with tender pork belly, chicken char siew and bamboo shoots sitting atop perfectly cooked noodles.

He estimates that two to three lobster heads are used for a bowl of ramen. He says in Japanese via a translator: "It is too easy and boring to have just lobster meat. Everyone can do that. It's about not having lobster meat, but still being able to enjoy lobster. I believe that you will taste more lobster."

Lobster meat or not, hungry diners have been slurping up his ramen since he opened his first outlet in Millenia Walk in 2010.

He also owns Gyoza King, which specialises in gyoza; Tendon Itsuki, popular for its tempura-topped rice bowl; and sake bar Takeda Shoten - all in Tanjong Pagar.

Like his 23 outlets in Japan, each of the outlets has its own theme, signature ramen and style.

While the food and beverage scene has proven volatile this year, Keisuke's two latest outlets - Lobster King and Kani King, which specialises in crab stock ramen - opened within just weeks of each other. Lobster King opened in February and Kani King last month.

In his stoic demeanour, he says poetically: "Sometimes, when you feel the urge to go (open a restaurant), you need to. Even if it's not good timing, you need to be firm, like a mountain."

Calling the ramen market here "stagnant", he adds: "My philosophy is that ramen should be versatile and I can offer much more."

Indeed, few chefs are as adventurous when it comes to the popular noodle dish, and Keisuke's innovative creations include snapping turtle and tomato-based broth.

Yet, the self-taught chef had no intention of becoming one and has had no culinary school training or high-school education.

Born in Hiroshima, Keisuke describes himself as a naughty child whose sole desire was to leave home. His housewife mum, 70, and father, 80, a retired salaryman, live in Osaka. His younger sister, 38, is a housewife living in Paris.

At age 16, he took his savings and moved to Saitama prefecture.

He says he decided to work in a restaurant for practical reasons. "I needed a house to stay in and money to eat. So working in a restaurant was the best. I could get three meals and was paid about 40,000 yen. My parents did not care about what I did."

However, about three years later, he decided to go back to Japanese cuisine.

He says grimly: "The economy was not good. Nobody was willing to pay for French food, which is considered expensive."

He spent seven years with a Japanese restaurant group developing recipes and opening new outlets before striking out on his own with an izakaya - a casual Japanese gastropub.

It was a rough start. He says: "We were losing money and thought it was going to close down. Restaurants in the area charged only about 500 yen a meal. I was charging 800 yen. We managed to make a profit only after a year."

It closed after seven years because of high rental rates.

In 2005 - two years after the izakaya opened - the savvy businessman turned his attention to ramen, which was then picking up in Japan.

Honing his creative streak, he came up with an eye-catching "black ramen". The ingredients were a mixed miso base with seven types of miso and bamboo charcoal, blended with cream - a nod to his French training.

Five months after he opened shop, a food critic posted about the black ramen on his blog and sparked a media frenzy.

Keisuke continued to extend his ramen reign. At the famous Tokyo Ramen Street in Tokyo Station, he opened Nidaime Keisuke Ebi Soba Gaiden selling prawn-based ramen in 2009, as well as New Old Style Pork Ramen Keisuke in 2010. The ramen street is home to many popular brands such as Rokurinsha, which specialises in tsukemen (ramen served with dipping soup).

For his prawn ramen, he became a popular TV personality through TV interviews and received many invitations to attend TV challenge programmes to present his interpretation of ramen.

In 2011, he won the title of Ramen Champion at the Tokyo Ramen Championships. The event is an annual gathering of more than 30,000 ramen chefs in Japan, who compete for the highly coveted title. After various rounds of cook-offs, the winner is picked by public voting.

Keisuke considers this period to be his peak. He expanded his repertoire rapidly in Japan, serving fugu ramen in Ginza, beef and pork ramen in Nagoya and Sapporo miso ramen in Tokyo.

With the success in Japan, he was itching for a challenge overseas.

With an investment of $650,000, he opened his first overseas outlet, Ramen Dining Keisuke Tokyo, in 2010 at the now-defunct Parco department store in Millenia Walk.

He says: "I wanted a challenge to expand ramen culture, especially in Asia. Japan has an ageing population, so the number of people eating ramen is shrinking. I don't see a projection for the future in Japan."

It certainly proved a challenge. Back then, it was early days, before the craze for ramen kicked off in recent years. Bigger brands then included Tampopo, Ippudo, RamenPlay and Nantsuttei - all of which are still around today.

Keisuke recalls: "There was no business in the first year. I started to wonder if it was my biggest mistake. I didn't know anything about the Singapore diner and palate. I learnt the most that time. We need to serve what Singaporeans like."

Now, he sells more than 2,000 bowls a day across his eight outlets. Sales have been increasing steadily over the years, with a 143 per cent increase last year over 2014.

Indeed, with Lobster King, it seems that Keisuke has his ramen rhythm going.

He is delighted when The Straits Times highlights the localised ingredients in the bowl of lobster ramen - prawn wontons and prawn balls.

Clearly in tune with the Singaporean palate, he says: "I know Singaporeans love fishballs and wontons."

Other tweaks to suit the dining style here include having shorter strands of ramen noodles and giving spoons for people to slurp up the ramen with soup.

He says, grinning: "Unlike the Japanese, people here don't slurp noodles from the bowl. They put the noodles in the spoon and eat them with soup."

Chef-owner Eiji Futagami, 48, of Dashi Master Marusaya restaurant at Robertson Quay, can attest to Keisuke's creativity and adaptability. He says: "He is flexible and accepts all cultures and tastes. I'm always excited to see how he creates new ramen concepts to satisfy both the Japanese and Singaporeans. The brand is one of very few which are successful overseas."

But ramen remains his ultimate "soul food" and his favourite is rich Sapporo miso ramen, which he eats almost every day and says is perfect for wintry days in Hokkaido.

So far, expansion plans are under wraps for the year ahead, although he would like to open in the heartland "when the time is right".

He had opened a restaurant in Thailand four years ago, but it closed in 2014 because of "partner issues".

But come August, he will open a tonkotsu ramen restaurant in Perth.

His ramen empire now has 200 employees in Japan and about 100 in Singapore. His Japanese wife, a 45-year-old baking teacher, works with him in his headquarters back home. They have a 24-year-old son who is waiting to enter university in New York.

He says: "I met him for a job interview in 2010. The impression I got was that he is very friendly, as he was wearing casual clothes. This was unlike other Japanese bosses wearing a shirt and tie, which I find too serious.

"I recall when our first outlet was not doing well. He would tell us to be calm and not get nervous. He never panicked, instead he was determined. This motivated me to work harder."

And if you are still not convinced about his love affair with ramen, ask Keisuke about his signature, sleek and long ponytail that goes down to his waist.

He says, with a chuckle: "I started keeping my hair long when I opened my first ramen restaurant. I wanted to have a unique style, like my food."

Hoping to remain a ramen icon in 10 years, he says: "I want to be known as the pioneer of ramen. I want to have a legacy in Singapore."