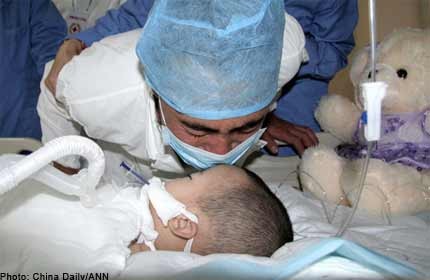 The parents of a little girl who never had a chance to live decided to give meaning to their daughter's death by donating the girl's organs to save two other children.

Nicknamed Xiwang, meaning "hope", the 2-year-old girl from Inner Mongolia was born with a terminal form of cerebral palsy.

Seeing that their daughter could not be saved, the thoughts of the girl's parents turned to how to handle her death.

"Instead of burning our dead daughter to ashes, we decided to donate her organs to save other kids. We called her Xiwang because we wanted to give the hope of life to other children who need our help," said Wang Xiaofei, the girl's mother.

At about 5:30 pm on June 9, when the girl's life was coming to an end, the father kissed his daughter goodbye and watched as she was sent into the operating room in Chifeng City Hospital. The doctors took out kidney and liver from the girl and sent the organs to Tianjin, where the two recipient children were waiting.

Deng Yingxin, Chifeng's Red Cross coordinator for human organ donation, said that the girl was the first female human organ donor in Chifeng and the youngest donor in Inner Mongolia.

Many people wanted to donate money to the girl's parents after they learned of her story and the parents' situation, but the parents refused financial support from others.

"We are young and can earn a living by our own hands. We do not want donations from others." Wang said.