5 must-have foods that repair your body 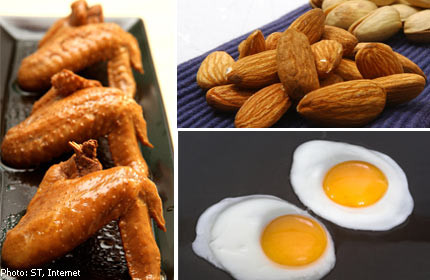 5 must-have foods that repair your body

Most people know that fish, meat and poultry are good sources of protein. Protein is required for building tissues in the body, and for repair and maintenance of such tissues.

Less well known is that legumes, nuts and seeds are also valuable sources of protein and a number of other important nutrients. In addition, they also contain several healthful bioactive substances. These foods are grouped together with the meat proteins in the fifth key message of the Malaysian Dietary Guidelines (MDG) 2010.

This key message recommends the consumption of moderate amounts of fish, meat, poultry, egg, legumes and nuts. Actually, these foods are more than just body-building foods. They provide nutrients that are vital for health and maintenance of the body, including protein, B vitamins, iron, zinc and magnesium.

Find out more about the nutritional goodness of these foods and the rationale for its recommendations. Several tips on how to achieve the recommendations are provided.

Eggs have high nutritional value and hence are recommended for consumption by all healthy persons. They can be eaten in various forms, up to one egg every day. Eggs can become an important source of protein for children. They are also relatively less expensive compared to other animal-derived foods.

The important nutrients in eggs include the following:

Soya bean and its products (e.g. tauhu, tempe, soya bean sprout, miso) are some of the most widely consumed legumes. A variety of legumes and their products should be consumed daily by everyone in the family, including people who eat meat, poultry and fish regularly. These plant foods are generally recognised as alternatives to animal foods and have important nutritional factors.

Nuts and seeds can be included in the diet, several times a week. They provide a range of nutrients and are generally pleasantly flavoured. Many types of nuts are appropriate for consumption, eg almond, pecans, pistachios and walnuts. There are also different types of seeds such as sunflower, pumpkin, sesame, poppy or flax seeds.

The main nutritional value of nuts and seeds include the following:

The consumption of these plant-based alternatives to meat, fish and poultry is encouraged for everyone. They are particularly valuable in a vegetarian diet as an alternative source of protein and other important nutrients.

For vegetarians, these foods, together with cereal foods, can provide most (but not all) of the nutrients provided by meats, fish and poultry.

Excessive intake is to be avoided

The recommendation is to consume "moderate" amounts of these foods. This is because although they are high in many nutrients, some foods in this group, namely those from animal sources, are high in saturated fat, while others are high in cholesterol.

Foods that are high in saturated fat include fatty cuts of beef, pork and lamb; sausages, hotdogs and bacon; some processed meats such as regular bologna and salami; and some poultry such as duck. Some foods from this group such as egg yolk (egg white is cholesterol-free) and organ meats such as liver and kidney are high in cholesterol.

MDG 2010 has highlighted the nutritional value of these foods and the importance of consuming them. These are placed at the third level of the food pyramid, and are recommended to be consumed in moderate amounts.

There are six key recommendations within this key message.

4. Choose meat and poultry that are low in fat and cholesterol.

6. Include nuts and seeds in weekly diet.

The Nutrition Society of Malaysia has made available leaflets of these MDG suitable for the public (www.nutriweb.org.my).