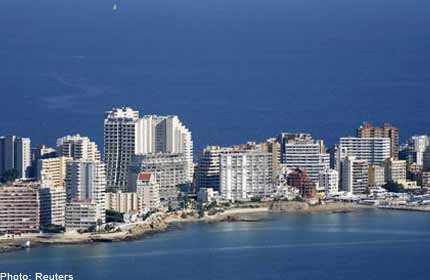 Photo above: Calpe, near Valencia, where some guests at the Diamante Beach Hotel fell ill in a previous outbreak of legionnaire's disease.

MADRID - Eight people, including three Belgians, have come down with Legionnaires' disease in a hotel on Spain's Mediterranean coast that was closed after an earlier outbreak killed three Britons this year, officials said Tuesday.

"None of the cases is particularly serious," said the city of Valencia's regional health official Luis Rosado.

But he said the hotel was closed a second time "to avoid new cases and isolate the bacteria."

The nationality of the five other sick people was not immediately known. The latest outbreak at the Diamante Beach hotel in the resort of Calpe, northeast of Alicante, was detected in the third week of June.

Rosado said the hotel had reopened after the earlier outbreak as experts agreed that "there was reliable evidence that the bacteria were no longer present."

The three Britons, who died between January 26 and February 2, were aged between 73 and 78 years and had been found to have pneumonia caused by Legionnaires'.

Authorities said in February that 15 people aged between 44 and 88 in all were infected - 11 Britons and four Spaniards - including the three who died.

The disease, caused by the bacteria Legionella, leads to a severe form of pneumonia which can be fatal.

It is contracted through inhalation of contaminated water droplets and is not known to be transmitted from person to person.