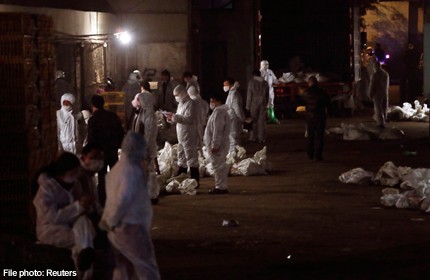 SHANGHAI - China reported another death and four new infections from a new strain of bird flu on Saturday, raising the death toll to 18, the official Xinhua News Agency said.

The H7N9 virus has been found in 95 people, mostly in eastern China. The latest victim is a 69-year old man surnamed Xu from Zhejiang province who passed away Friday night after emergency treatment failed, Xinhua said.

On Friday health officials raised questions about the source of this strain of bird flu indicating that more than half of patients had no contact with poultry.

While it is not clear how people are becoming infected, the World Health Organisation (WHO) says there is no evidence of the most worrying scenario - sustained transmission between people.

The WHO's China representative, Michael O'Leary, issued data on Friday showing that half of the cases analysed had no known contact with poultry, the most obvious potential source, but he said it appeared human-to-human transmission was rare.

China announced the first case of human infection of the H7N9 in late March and has since has been praised by the WHO for its handling of the situation.