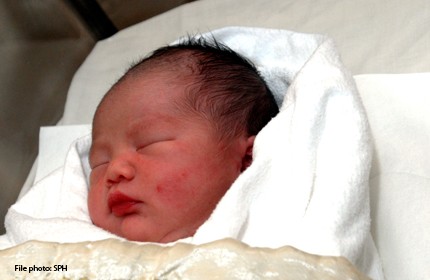 Babies don't learn to talk just by hearing sounds. New research suggests that they're lip-readers too.

It happens during that magical stage when a baby's babbling changes gradually from gibberish to syllables and, eventually, into that first "mama" or "dada".

Florida scientists discovered that, starting around age six months, babies begin shifting from the intent eye gaze of early infancy to studying mouths when people talk to them.

"Babies, in order to imitate you, have to figure out how to shape their lips to make that particular sound they're hearing," explained developmental psychologist David Lewkowicz of Florida Atlantic University, who led the study, published on Monday.

"It's an incredibly complex process."

Apparently, it doesn't take them too long to absorb the movements that match basic sounds. By their first birthdays, babies start shifting back to looking you in the eye again - unless they hear the unfamiliar sounds of a foreign language. Then, they stick with lip-reading a bit longer.

The babies "know what they need to know about, and they're able to deploy their attention to what's important at that point in development".

The new research appears in this week's issue of the Proceedings Of The National Academy Of Sciences. It offers more evidence that quality face-time with your tot is very important for speech development - more than, say, turning on the latest baby DVD.