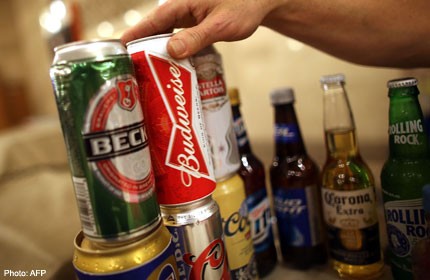 PARIS - The taste of beer, even without any effect from alcohol, triggers a key reward chemical in the brain, according to a study released on Monday that explores how people become hooked on booze.

Neurologists at the University of Indiana asked 49 men to drink either their favourite beer or Gatorade, a non-alcoholic sports drink, while their brains were scanned by positron emission tomography (PET).

The goal was to look at dopamine, a chemical in a part of the brain called the ventral striatum that gives the sensation of reward.

The beer was rationed out in tiny amounts - 15ml, or about one tablespoon, every 15 minutes - so that the brain could be scanned without the influence of alcohol.

Just a taste of the beer lit up dopamine receptors, and the effect was far greater than that of Gatorade, even though many volunteers said they preferred the taste of the sports drink, the investigators found.

The dopamine effect was significantly greater among volunteers with a family history of alcoholism, they reported.

"We believe that this is the first experiment on humans to show that the taste of an alcoholic drink alone, without any intoxicating effect from the alcohol, can elicit this dopamine activity in the brain's reward centres," said Dr David Kareken, a professor of neurology who led the experiments.

Dopamine has long been associated with substance craving, with anecdotal evidence suggesting that it can be triggered by the sound, sight or smell of a pub. As a result, researchers have focused on techniques for avoiding or minimising such triggers. Pharmacologists, meanwhile, are exploring treatments to block cells from responding to dopamine.

The study, published in the journal Neuropsychopharmacology, drew a mixed response from outside experts.

Some thought the study was innovative, others thought it was too small and many were intrigued that a family connection with alcoholism was linked to a higher dopamine response.