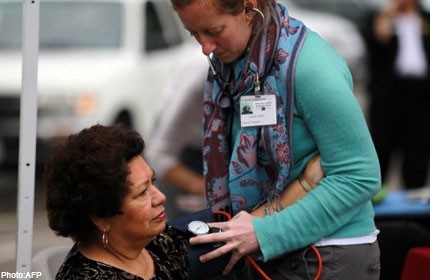 The randomized trial included 4,736 patients aged 60 and over who had high blood pressure.

Some were given a drug called chlorthalidone and others were given a sugar pill for a 4.5 year period beginning in 1985.

At the end of the Systolic Hypertension in the Elderly Program (SHEP) trial, all participants were advised to begin following the drug regimen.

Recently, researchers in New Jersey decided to go back over the data, in consultation with the National Death Index, to see if the therapy had any impact on long-term life expectancy.

Those who took the drug lived 158 days longer before dying of cardiovascular causes than people who had taken the placebo, and 105 days longer when it came to dying of any cause.

"The gain in life expectancy free from cardiovascular death corresponds with one day (0.89 days) gained per month of treatment," said the study.

"For all-cause mortality, the gain in life expectancy from one month of antihypertensive drug treatment was estimated at a half day (0.59 days)."

The study, led by John Kostis of the University of Medicine and Dentistry of New Jersey-Robert Wood Johnson Medical School, should send a "strong message" to patients and doctors about the benefits of anti-hypertensive therapy, it concluded.

Left uncontrolled, high blood pressure - defined as 140/90 mmHg (millimeters of mercury) or above most of the time - can lead to heart failure, stroke, and kidney disease.

About one in three US adults has hypertension, according to the Centers for Disease Control and Prevention.

The research was funded by the National Heart, Lung, and Blood Institute, the National Institute on Aging, and the Robert Wood Johnson Foundation.