Boy, 8, puts on 11kg in a month to save cancer-stricken father 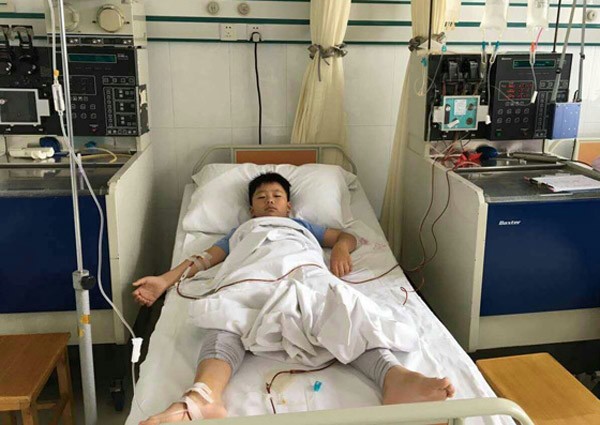 An eight-year-old boy gained 11kg within a month in order to undergo a hematopoietic stem cell transplantation to save his father in Jiangsu, China, and the surgery was carried out recently.

Cao Yinpeng stood outside an intensive care unit of the Affiliated Hospital of Xuzhou Medical College to talk with his father Cao Lei through sign language on Tuesday, a week after the surgery.

Earlier this year, Mr Cao was diagnosed with leukemia, but there was no matching hematopoietic stem cell within the China Marrow Donor Program, a national marrow bank.

The cancer-stricken man is an only child whose parents are too old for bone marrow donation. Doctors suggested that they could transplant his son's bone marrow, but his weight should be more than 45 kilograms.

The boy's mother said that he weighed 35.5kg at that time, but he started to eat a lot to reach the target weight after learning that he could use his bone marrow to save his father.

His grandmother said that she made all food he liked, especially meat. Within a month, he put on 11kg.

On July 6, doctors successfully collected 355ml of hematopoietic stem cells from the child and transplanted them into his father's body.

The boy was happy that he could save his father, and now he is trying to lose weight.

He also dreams of travelling to Australia with his father in the coming winter, to realise the plan that he and his father had made.

The surgery has cost the family more than 400,000 yuan ($80,000), and another 400,000 yuan is needed for future medical treatment, which the family cannot afford, said the boy's mother. The family has sold their apartment to raise the money for the surgery.