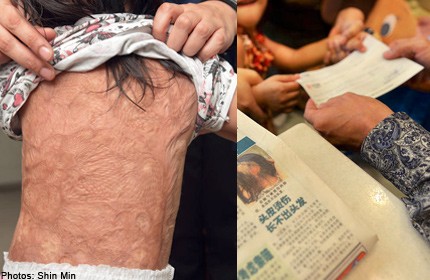 SINGAPORE - A businessman in his 50s, who wished to remain anonymous, has donated $15,000 in an act of kindness that could ensure that little Alya (not her real name) grows up to be a normal girl.

The two-year-old suffered horrific burns to her back in Oct 2011 when she somehow ended up on top of some heat packs that had been immersed in hot water.

According to court documents, the packs had been left there to cool by the babysitter's husband, Mohammad Shahrin Akbar, 31. He had placed them on a queen-sized bed next to a small mattress where the girl lay.

The babysitter, Ms Mardianah, 30, said she had left the flat for a while to buy bread from a nearby supermarket.

Alya suffered burns to 35 per cent of her body, including her face, neck, upper limbs, chest, back, thighs and buttocks. She was hospitalised till Jan 6 last year, undergoing 12 operations and needs long-term scar management therapy.

Alya's mother, Madam Farah (not her real name), 31, is now saddled with hospital bills totalling $30,000 and so far, she has managed to settle about half of it, paying in instalments.

According to a New Paper report, Madam Farah is a single mother earning about $1,500 a month.

After the publication of the news, a reader called Shin Min Daily News' hotline and expressed his desire to help the family.

He said after he read about Madam Farah and Alya's plight, he felt compelled to step forward to offer his help.

"At such a small age, she has to put up with that kind of pain and trauma, and in the future she has to face society - it makes one sad," he told the Chinese daily.

"The family is under such mental and psychological pressure, and I hope to help by relieving their financial burden.

After receiving the $15,000 cheque, Madam Farah was moved to tears on the spot, Shin Min reported.

The paper had arranged for the anonymous donor to personally hand the cheque to Madam Farah.

She said that she is extremely grateful for his timely help, and wants to continue keeping in touch with him. "For a stranger to suddenly help us repay the bill, I am very surprised and can only silently give thanks," she said.

She added that Alya's skin is no longer as sensitive as last time, and does not constantly itch anymore. She said that she can now take her out to play, but needs to pay special attention to her.

"I try not to cry in front of her as I don't want to upset her, and wish for her to grow up to become a normal girl," she said.