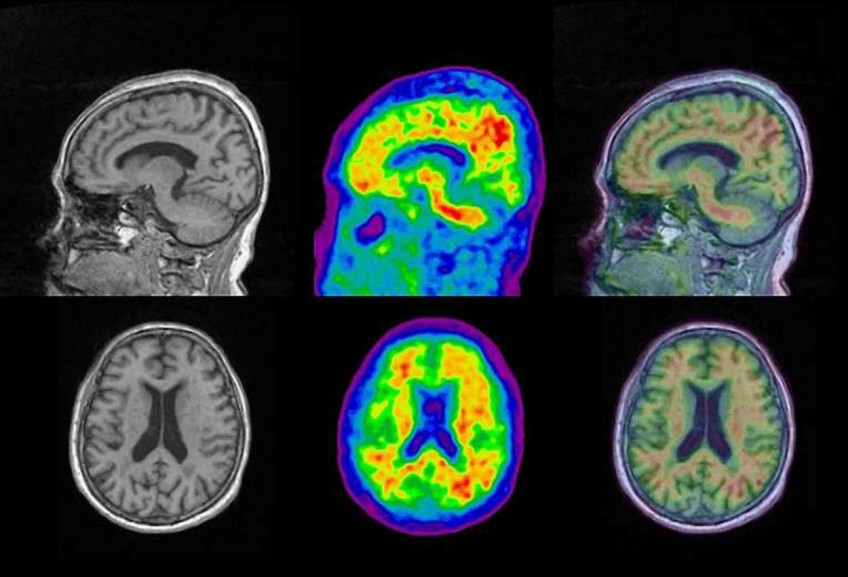 An MRI scan (left) shows brain structure, while a PET scan (centre) lets researchers see amyloid presence in red. Combining the two images (right) could help doctors find out which parts of the brain have a build-up of the protein linked to Alzheimer's disease, paving the way for better treatment.
Clinical Imaging Research Centre

Doctors have long known that people with Alzheimer's disease develop clumps of a protein called amyloid in their brains - the problem was identifying this condition while they were still alive.

But in a first for Singapore, researchers at the Clinical Imaging Research Centre (CIRC) have managed to capture "live" images of these protein deposits in people's brains.

This paves the way for better diagnosis and treatment of Alzheimer's disease, which is the main cause of dementia in up to seven in 10 patients.

Associate Professor Christopher Chen, who was part of the team that took the first living brain scans here, said amyloid is deposited in the brain long before people start showing symptoms. These microscopic proteins are thought to stop brain cells from sending signals to each other or to be even directly toxic to the brain, although scientists do not know for sure.

"If we were to base our entire concept of dementia and Alzheimer's disease on just cognitive symptoms, we may be missing opportunities to intervene at early stages," said Prof Chen, who is from the departments of pharmacology and medicine at the National University Health System.

"That is why research capabilities to track these changes in the brain are so important."

Previously, scans allowed doctors to pick up changes in brain structure or activity, but not conclusively say if someone has Alzheimer's.

Being able to do so could change the way people are diagnosed and treated, said Prof Chen. For instance, it could help research teams get a better idea of who to pick for anti-amyloid clinical trials.

"This kind of imaging is also useful to monitor whether treatment is effective, for us to see if the amyloid load is actually reducing," Prof Chen said.

It could also help doctors understand why some people who have mild cognitive impairment - where symptoms are not bad enough to interfere with their daily activities - go on to get dementia, while others do not.

Dementia affects an estimated one in 10 people aged over 60 in Singapore, where the population of seniors is expected to double to 900,000 by 2030.

Prof Chen's team at the centre, which was jointly established by the Agency for Science, Technology and Research (A*Star) and the National University of Singapore, is recruiting 110 people with cognitive impairments for a study to detect the presence of amyloid in their brains.

Ten of these would have already been diagnosed with Alzheimer's disease, while the other 100 would have mild cognitive impairment.

Twenty people have been recruited as of the end of last month.

They will be injected with a radiopharmaceutical, which travels to the patient's brain and binds to amyloid deposits. Then, they will undergo a positron emission tomography (PET) scan on which these deposits show up.

Scans using the same technology are already being carried out in the United States and Europe.

"With our radiopharmacy capability, we can radiolabel important molecules that reach targets for many applications in neuroscience, oncology, infectious diseases and cardiology," said Professor David Townsend, who is the centre's director.

Prof Chen said the new capabilities will help his team study other molecular features in the brain, saying: "Amyloid is not the end of the story - it's only the beginning."

This article was first published on July 07, 2016.
Get a copy of The Straits Times or go to straitstimes.com for more stories.