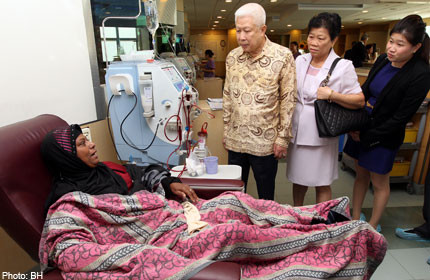 SINGAPORE - The National Kidney Foundation (NKF) has received its largest donation from a living person in 13 years.

Mr Kasmadi, an Indonesian-born Chinese who resides in Singapore and is celebrating his birthday this month, said he felt it was timely to contribute back to the needy in society.

He said that he believes that when one is successful, he or she must not forget those who are less fortunate.

Mr Kasmadi has businesses interests in hospitality and manufacturing and first came to Singapore 20 years ago.

In 1999, NKF received its largest donation from a living person from the chairman of the SUTL Group, Mr Tay Choon Hye.

Mr Tay, who has since passed on, donated $5 million for NKF to set up a dialysis centre.

Over the years, NKF said it has received large donations of over a $1 million - but as legacy gifts from individuals who have bequeathed their money and assets.

The money will go towards providing dialysis and rehabilitative care at affordable and highly subsidised rates.

NKF said that more than half of its patients pay less than $50 a month in out-of-pocket costs, compared to up to $3,000 which patients at private dialysis centres pay.