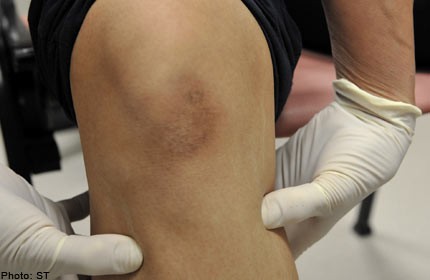 CHINA - The health authority in East China's Jiangxi province will investigate a medical dispute after a couple claimed that a hospital mistakenly operated on their daughter's right leg when she required surgery on the left, Xinhua News Agency reported on its Sina Weibo account on Friday.

The agency said the couple alleges that the hospital mistakenly operated on the 6-year-old girl's right leg, instead of her left.

China Central Television's website said on Thursday that the Second People's Hospital in the province's Leping city performed surgery on the girl's right leg on April 20, but her parents claim the diagnosis was for surgery on the left.

Liu Xuemei, the girl's mother, told CCTV that her daughter has required surgery to her left leg since she was born and had a previous operation in Shanghai to enable her to walk properly.

The girl's father, Dai Shengliang, said he asked to see the consent form after the operation and noticed that the word "left" had been altered to "right".

A photocopy of the consent form shows that the strokes of the Chinese character are unclear.

Zhang Xuelin, the hospital's vice-president, said the scrawled word was a "rewrite" rather than an alteration.

An official at the city's health bureau, who begun an investigation into the dispute, told CCTV that the hospital had made a mistake when writing the medical record, saying that revisions must be clearly marked, rather than simply writing a new word on top of the original.

Dai said his daughter's operation had taken less than 20 minutes, and he thought it had gone well until he realised that he girl's right leg had been operated on.