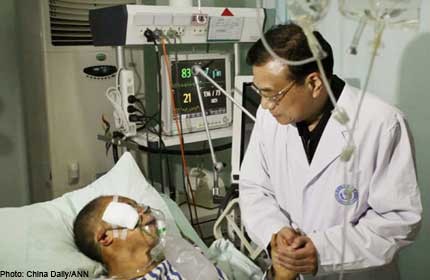 Li visited the West China Hospital, a leading facility in Chengdu, Sichuan's capital, which has taken in a number of seriously-injured patients who had been transferred from the quake-hit areas.

Before heading to the hospital, Li had been in Lushan County, the epicenter of the 7.0-magnitude earthquake, since Saturday afternoon, giving instructions of the rescue and relief work.

At the hospital's intensive-care unit, the premier asked doctors about the conditions and treatment of several patients.

Among the patients was Yue Anhong, a local resident who was buried under rubble and seriously injured.

"Be relaxed and relieved. Doctors here will make their utmost efforts to help you recover as soon as possible," Li told her at her sickbed.

He told local officials that the top priority of the quake-relief work is to save people's lives, which include searching for survivors and providing them with medical treatment.

He stressed that those who were seriously injured in the quake should be given effective medical treatment, so as to minimize the number of casualties.

Another patient Yang Shangming, who has been in a stable condition after receiving medical treatment, was worrying about the medical fee.

Li reassured him that the government would cover the medical fees for those who were seriously injured in the quake, so as to guarantee meticulous treatment for them.

Doctors of eight-year-old Zhang Ke said the boy was seriously shocked by the quake.

The premier extended greetings to medical workers engaged in the rescue and relief work.

"All medical workers here have tried their best. You are bearing a heavy mission since this hospital has taken in the largest number of seriously-injured people from the quake zone and they have trusted you with their life and health," he said. "I believe through your efforts patients will recover as early as possible. This is also what people across the country expect."

After the hospital visit, Li returned to Beijing Sunday afternoon.