Company claims pus-filled sores due to allergy, not mask 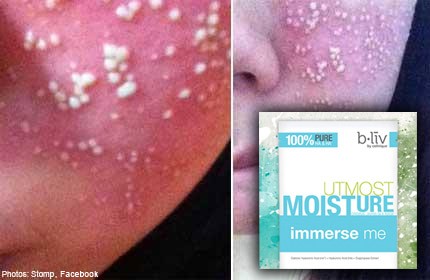 Company claims pus-filled sores due to allergy, not mask

When Carol Xie Zing Yi, 21, applied a facial mask last Wednesday afternoon, she did not expect that it would cause her to break out into horrific pus-like bumps all over her face in a matter of hours.

Upset by her experience, she went to the company's website to send them an email and leave a negative review for the product.

When her review was not approved, she took it a step further: she submitted her complaint to citizen journalism website Stomp, which attracted the attention of several media outlets.

However, Cellnique Paramedical, the company behind the face masks, says that the problem does not lie with the masks, but with the girl's skin.

"This is not a case of out of 100 people, 50 get a reaction. b.liv has sold thousands of these masks since 2010 and have not come across such a situation before," said Audrey Chong, head of Cellnique's strategic business unit.

The b.liv representitive added that they are confident that there are no problems with the masks and have a money back gurantee.

"This is just a random allergy case," she said.

Furthermore, according to Ms Chong, Cellnique did not receive any product review from Ms Xie, and hence did not reject her review for the sake of having only positive reviews on their site, as Xie claimed on Stomp.

Ms Chong said they also did not receive any email, and only found out of the matter when contacted by YourHealth last Friday.

The company claimed that the incident could not have been caused by the mask, as the development of pus takes more than a few hours.

In addition, the ingredients used in the mask are all ingredients commonly used in most masks.

In response to the original Stomp post, a comment was posted under the company's name that said the severe reaction could be due to a variety of reasons, including a virus/bacteria infection, immune disorder, the person having oral herpes or cold sores, or even "touching animals/fruit before touching the face".

Collagen in mask could be cause

Ms Chong said the company is viewing this matter seriously, and stressed that there is no proof that Ms Xie used the masks in the first place.

Ms Xie threw away both the packaging and the receipt.

To further investigate the matter, Cellnique is sending Xie for an allergy test at The National Skin Centre (NSC), to be paid for by the company.

The distributor also paid for Xie's second consultation session with her dermatologist, Dr Chua Teo Ngee, and will be reimbursing her for her first visit to the doctor for her condition.

Dr Chua opinioned that the breakout was likely due to an allergic or irritant reaction, and not a bacterial infection.

The white bumps, which appeared to be pus filled, were merely white blood cells migrating to the surface of the skin, he said.

"If the reaction is very strong, it can happen in a few hours," he said.

Dr Chua speculated that it might have been the collagen in the mask that caused the breakout.

Dr Wang Yi Shi, Consultant at Changi General Hospital's (CGH) Department of Dermatology, said the reaction was most likely caused by the fruit acids or the preservatives used.

"The concentrations may have been too high, or this person may have very sensitive skin and could not tolerate this product, even with the ingredients used at appropriate concentrations," he said.

Although Ms Xie's skin appeared to have mostly healed when YourHealth spoke to her today, Dr Chua still advised her to go for the allergy test so that she will know which products to avoid in future.

Ms Xie's skin appeared to be smooth with slight discolouration on Wednesday. Dr Chua said the scarring should heal in a few months.

Cellnique said they will continue to monitor Xie condition.

The distributor also said they will be sending both the "Leach me" and "Immerse me" line of b.liv masks for lab testing.

b.liv is the brand of mask Xie said caused the breakout. Ms Xie told the media she used the "Leach me" line, but later said she had used the "Immerse me" line.

Although there is a 14-day money-back guarantee, Ms Chong said it is against company policy to give refunds if there is no packaging or receipt as proof of purchase.

They have since asked all Sasa outlets here to stop selling the masks till the investigations are complete.

This story is exclusive to YourHealth, AsiaOne.