Do men get postnatal depression?

Men don't get pregnant. They don't give birth to babies. Their hormones don't yo-yo like nobody's business. Their nipples don't get sore. So, what do they get depressed over when making the transition from 'husband-and-wife' stage to welcoming fatherhood?

According to an article in The Guardian, quite a lot, apparently. Researchers from Sweden have conducted a study on Swedish fathers and whether they had depression after the birth of their child, and found that 30 per cent of the respondents had exhibited signs that scored above mild depression.

A note of concern was that out of this 30 per cent, fewer than one in five of the fathers who were depressed sought help, and more alarmingly, a third of them had thoughts about self-harm. This is vital, as although women in the UK are often asked questions that screen them for signs of postnatal depression, the mental health of fathers is rarely assessed.

Elsa Psouni, the leader of the Swedish study and professor of psychology at Lund University, goes on to explain that the Edinburgh Postnatal Depression Scale (EPDS), which is used for both women and men to detect postnatal depression, is not so accurate in picking up depression in fathers.

This is further reinforced in her research, which reflects higher levels of depression in dads, because it added a score that is more reflective of depression symptoms that are more masculine in nature, such as agitation and drinking too much alcohol.

Psouni adds that fathers also face the same problems as what mothers do - balancing fatherhood with their work demands and job issues. Other factors, like lack of sleep and having conflict in the relationship also contribute to their depression as well.

Read Also
Ask the health expert: I have been feeling sad, how do I know if it is depression? 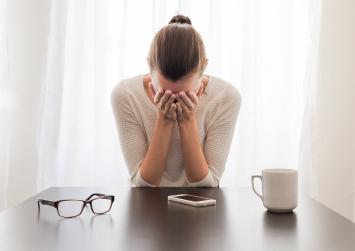 Such depression can be negative for a child's well-being and development, as a depressed father will smile less and play less with them as compared to happier ones. In fact, studies have shown that children who are affected by paternal postnatal depression have poorer measures of well-being and exhibit more behavioural problems as compared to those who aren't.

Dads who sense that they may have some struggles in embracing fatherhood, along with their partners, relatives, and even friends who notice an increase in the irritability and anxiety of a father who is in his first year of parenthood should consider the possibility of him suffering from paternal postnatal depression.

After all, if the depression is not treated early enough, "one of most terrible things is that you catch up with yourself a year later and realise you have been really down and struggling - and the first year of your child's life has gone," says Psouni.

This article was first published in Men's Health Singapore.