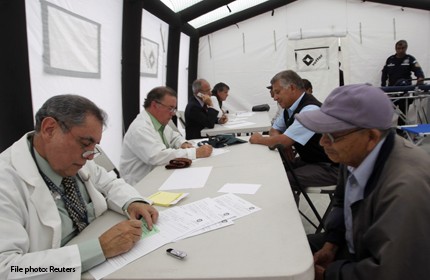 In a new study of patients with bacteria in their urine, doctors prescribed antibiotics to one in three who had no symptoms and no evidence of a urinary tract infection.

In those cases, the bacteria probably would have disappeared on their own without causing any problems, researchers said, and treating those patients with drugs goes against guidelines -- because it increases the risk of antibiotic resistance without any real benefit.

"When the average physician sees a positive (for bacteria) urine culture, they automatically think of treating," said Dr. Peter Gross, an infectious diseases specialist at Hackensack University Medical Center in New Jersey who was not involved in the new study.

Gross told Reuters Health that many doctors are afraid of the consequences -- such as getting sued -- if they decide not to treat bacteria in the urine and it does develop into something more serious. Others, he added, might equate a positive test for bacteria with a urinary tract infection, or UTI, without thinking about other options.

In the new study, researchers from the Houston, Texas, Michael E. DeBakey Veterans Affairs Medical Center and the MD Anderson Cancer Center analyzed the medical records of patients at their hospitals whose urine had tested positive for a specific type of bacteria in late 2009.

That included 339 specific cases. Most patients were older and male, and being treated in the hospital or emergency room when their urine was tested.

Based on information from the lab tests and notes on patient symptoms characteristic of a UTI -- such as fever and pain while urinating -- the researchers determined that 156 patients had an infection, while 183 had cases of so-called colonization, with no sign of infection.

In patients with UTI symptoms, doctors were almost 12 times more likely to prescribe antibiotics as in symptom-free cases, Dr. Barbara Trautner, of the VA, and her colleagues reported in the Archives of Internal Medicine this week.

Still, 60 patients out of the 183 without evidence of a UTI were treated with antibiotics, against guidelines from the Infectious Diseases Society of America.

Only in specific cases, such as in pregnant women, do guidelines recommend treating bacterial colonization in symptom-free people using antibiotics.

Hospital patients who need a catheter are especially likely to develop bacteria in the urine. If it's not a full-on infection, Gross said, those patients will probably clear any bacteria within a week after getting the catheter taken out -- without the help of antibiotics.

Trautner's team found few side effects associated with the antibiotics used in patients with or without a UTI.

That doesn't change the fact, they note, that using antibiotics when they're not called for contributes to drug resistance -- when bacteria no longer respond to one or more types of antibiotics and infections get more difficult to treat.

What's more, the most commonly used antibiotics in all patients with bacteria in their urine were quinolones, which are known as "broad-spectrum" antibiotics. Those drugs work against the widest range of bacteria, which means that resistance is a bigger concern with their overuse.

Many hospitals already have efforts in place to limit the unnecessary use of antibiotics, but Gross said the decision of when to use drugs still often requires a fair amount of judgment on the part of doctors. So patients' knowledge of appropriate and inappropriate use matters too, he said.

"There's nothing like an educated patient," Gross said. "Patients need to know that not every positive urine culture indicates infection, it could just indicate colonization."

When it comes to using antibiotics, he said, "I agree with, 'less is more.'"