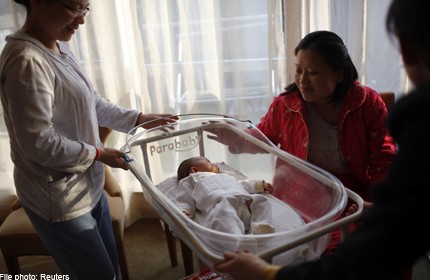 Children born by Cesarean section are no more likely to become obese than if they are born vaginally, according to a Brazilian study.

Past research from Brazil had found a link between excessive weight and C-sections, leading some scientists to suggest that not being exposed to bacteria from the birth canal could make children fatter, but the latest findings - published in the American Journal of Clinical Nutrition - suggest this doesn't appear to be the case.

The research is of particular interest in Brazil, because in 2009 more than half of the babies there were born by C-section.

In the United States, the number has been on the rise for years and is now over 30 per cent.

"We thought from the beginning that probably what happened with the previous study is that they didn't adjust for all of the confounders," said Fernando Barros of the Catholic University of Pelotas, who worked on the study, referring to factors such as the mother's height and weight.

Barros and his colleagues used data on three groups of several thousand people born in Southern Brazil in 1982, 1993 or 2004.

Researchers contacted the children at different ages until the oldest had turned 23. Those born by C-section were more likely to be heavy, with obesity rates between nine and 16 per cent, compared to rates of seven to 10 per cent of children born vaginally.

However, that difference vanished once the researchers accounted for factors such as family income, birth weight, schooling and the mother's weight, height, age and smoking habits.

"When you factor in all of these other factors, the relationship between obesity and Cesarean sections disappears,"said Barros.

The earlier Brazilian study left out many of those factors, including maternal height and weight, Barros's team wrote in its report.

"The really simple explanation would be that more obese women require more Cesarean sections than lean women... and it's really not the C-section itself," said David Ludwig, director of the Optimal Weight for Life Clinic at Children's Hospital, Boston, who was not involved in the study.

He said that things such as a pregnant woman's diet and smoking habits, and whether or not she has diabetes, might influence a developing fetus.

Some believe that C-section babies are different because they are not exposed to bacteria in the birth canal like babies born vaginally. The theory is part of a hypothesis which suggests that a person's immune system develops differently when they're not exposed to beneficial bacteria early in life.

"We're not saying this hypothesis is not interesting. It is.