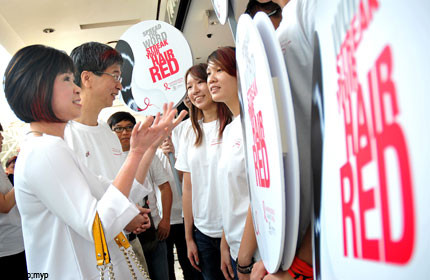 SINGAPORE - Guidelines on managing HIV cases at the workplace will be changed early next year, in a bid to remove the stigma and discrimination against people with the virus.

This was announced yesterday by Dr Amy Khor, Minister of State for Health and chairman of the National HIV/Aids Policy Committee.

Speaking at an event to commemorate World Aids Day, which falls on Thursday, Dr Khor said there have been cases of workers who were dismissed because they were found to be HIV positive.

"If they are treated and cared for, they can continue to work and contribute to the company and the economy constructively and productively," she added.

The Singapore National Employers Federation (Snef) and Health Promotion Board (HPB) are working to revamp the guidelines, called the Snef HIV/Aids Workplace Guidelines.

For instance, there will be a new section to guide human- resource managers on how to handle an employee with HIV.

He added that adults in this age group form the bulk of those with HIV, based on figures released by the Ministry of Health (MOH) yesterday.

MOH revealed that 48 per cent of those with HIV are aged between 30 and 49 years old.

In the first 10 months of this year, there were 370 new HIV cases reported among Singaporeans and permanent residents.

The total number of detected HIV cases this year is expected to be similar to that of last year, which was 441 cases.

Dr Khor highlighted a worrying trend, where the majority of new cases are detected at a late stage.

Of the 200 HIV cases detected in the first six months of this year, 58 per cent of them already had late-stage HIV infection when diagnosed.

MOH said this was similar to the pattern in previous years.

Last year, 54 per cent of HIV patients diagnosed were at the late stage of HIV infection.

Dr Khor called for groups at risk, such as those who engage in casual sex, to go for regular HIV testing to ensure early detection and treatment.

Only about 14 per cent of the new cases reported in the first half of this year were detected through voluntary HIV screening.

An HPB survey, the results of which were also released yesterday, showed that acceptance of HIV patients is increasing.

For instance, almost 41 per cent of respondents said last year that they were willing to share a meal with a person who had contracted HIV, compared to just 22 per cent in 2007.

While heartened by this, Dr Khor said "there is still a long way to go" and efforts need to be intensified to dispel myths and misconceptions about HIV.