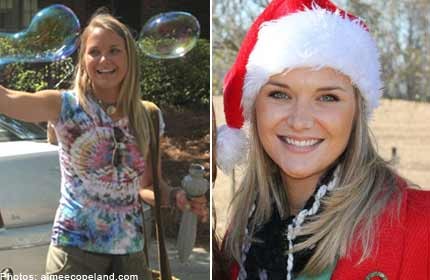 Come Monday, 24-year-old Aimee Copeland will finally get to leave hospital after enduring a harrowing two months fighting for her life against a flesh-eating disease.

On May 1, 2012, Copeland contracted the bacteria after she received a deep cut in her leg from a fall from a homemade zip line over the Little Tallapoosa River.

Within hours, the bacteria began devouring her flesh, sending her straight to the doctor.

By Friday, her left leg was gone, amputated in an attempt to halt the progress of the necrotizing fasciitis bacteria. The coming weeks would see her right foot, fingers and eventually both hands removed as the bacteria ate into them.

On May 20, Copeland finally breathed on her own.

Today, she is making preparations to leave hospital and move into a rehabilitation centre. But her ordeal is not over yet - she will spend several weeks learning to move, before gradually returning to normal life.

However, her family said that Copeland is 'real excited' about leaving the hospital for a change of venue.

According to The Daily Mail UK, she is doing well and is in close touch with her friends, making regular hour-long phone calls. According to Mr Gary Duke, owner of Sunnyside Cafe, her former workplace, she sounds strong and in reasonably good spirits.

Writing in his blog chronicling the terrifying accident and the progress Copeland is making so far, her father Andy Copeland described the incredible moment when Copeland got up in a wheelchair and rolled out of her hospital room on June 25.

This was the first time in 49 days Copeland got to go out into the sunshine and outside the four walls of her hospital room.

"The smile on Aimee's face said that this was the best therapy that she has had in weeks," he wrote.

During those precious moments outside, he asked her how she felt about the tragedies of the past 49 days.

What's more amazing about her response is that Copeland later clarified that it was not that she was feeling blessed to be alive.

She said she feels blessed to have had the opportunity to experience something that not many other people have the chance to experience.

Her father later told Good Morning America that Copeland intends to walk at her Master's graduation ceremony this December.

"You heard the word right. Walk. That's what she intends to do," he told an incredulous audience.

This comes after doctors declared her chances of survival slim just about a month ago.

Her condition was so bad that it was causing her immense pain - enough to force her into taking morphine, despite her staunch believe in holistic medicine and not using drugs to manage pain.

Today she also suffers from phantom pains, caused by her brain telling her body that her amputated limbs are still there.

"It feels like I have been carrying bags of rocks," she said, describing the pain.

Copeland might have recovered significantly, but she is still far from going home. She faces a long road of rehabilitation therapy to gain back a chance at a normal life.