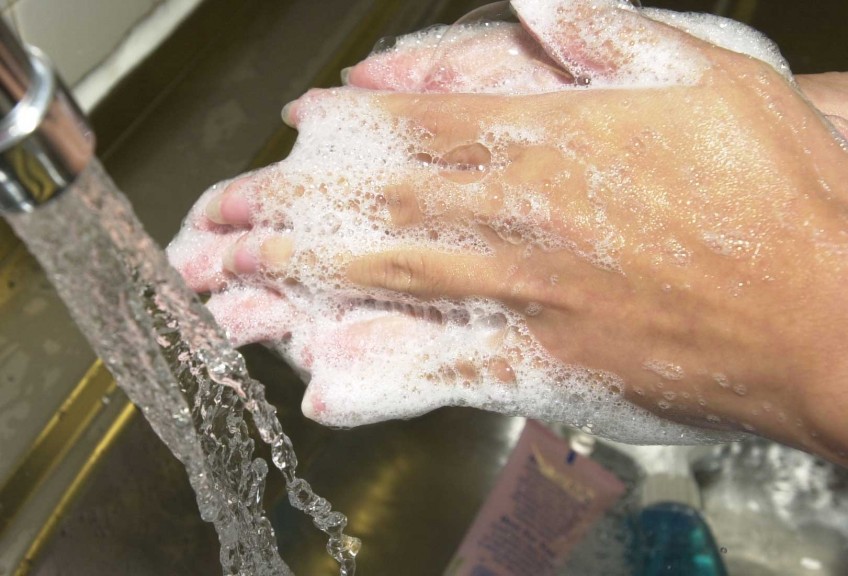 After washing vegetables, hands should be washed well to prevent food poisoning.
EYEB

One way to battle this scourge is to wash the hands before and after cooking, and at regular intervals in between, in addition to heating and refrigerating food and disinfecting cooking utensils. A kitchen foam hand soap can quickly and easily wash away dirt and keep bacteria at bay.

In a report compiled by the Health, Labor and Welfare Ministry on food poisoning outbreaks last year, 69 per cent - the highest number - originated at eating and drinking establishments, followed by homes at 11 per cent, hotels at 6 per cent and caterers at 5 per cent. These figures show that food poisoning cases occur more than expected in homes.

Rieko Yamagishi, who has been involved in the research and development of detergents at Lion Corp. for many years, said, "The kitchen has more bacteria than anywhere else in the house."

This is because bacteria that can cause food poisoning are often present on raw meat and fish and unwashed vegetables. As food ingredients are cut and washed, the bacteria gets onto the hands and is then transferred to everything else that is touched.

Last year, Lion performed a study where 11 women in their 20s to 50s each prepared a stir-fry dish of meat and vegetables and a fresh vegetable salad. The women's hands and their cooking utensils were then tested for bacteria coliform. Bacteria was found on everyone's hands, on the handles of kitchen knives used by seven of the women, and on the edges of the bowls nine of them used to prepare the salad.

Video footage of the women cooking revealed that most of the women retrieved food ingredients from packages with their bare hands and then handled kitchen knives without washing their hands.

Only a few of them washed their hands after putting chopped ingredients into frying pans with their hands or after washing cooking utensils, and some even served the salad without washing their hands first.

As such actions can potentially lead to outbreaks of food poisoning, Yamagishi recommends the following:

Getting rid of odours

To prevent the hands from spreading bacteria, it makes sense to have a bar of soap or liquid/foam hand soap handy. Although dishwashing detergent is available, Yamagishi said, "It is not suitable for washing the hands, as there is a possibility not all dirt will be removed if they are washed too quickly."

KireiKirei Medicated Foaming Hand Soap for the Kitchen (¥409/S$5.47), which was released by Lion last year, has a blend of medicinal ingredients that help remove grease from raw meat and eliminate raw fish odours. A trapezoidal container makes it easy to push the pump with the palm or back of the hand when the fingers are greasy.

Muse No-Touch Kitchen (¥1,480) by Reckitt Benckiser Japan Ltd. has a sensor that triggers the automatic release of foam when a hand is placed under it. As there is no need to touch the pump directly with dirty hands, it is hygienic. The dispenser is battery-powered and replaceable bottles containing cleaning solution are inserted for use.

Saraya Co.'s Yashinomi Kitchen Foaming Hand Soap (¥486) contains citric acid that neutralizes fish odours. It is fragrance-free, so there is no need to worry about, for example, onigiri rice balls smelling of soap after washing the hands.

Each of these products dispenses the soap in the form of foam, which is great at absorbing dirt and grease. Such hand and bar soaps are more effective if one lathers the hands well.