Food was their passion, and their problem: How overweight couple lost 59kg in a year and ran a half marathon

Mick Tsang and Tina Choi were overweight and it was affecting their health. They decided to lose weight together, and with help from clubs and friends the pounds started falling off.

When Mick Tsang and Tina Choi committed to losing weight after years of overindulgence, mutual support and the help of their fitness community made all the difference.

The Hong Kong couple met 18 years ago at the printing company where they worked, and have been married for eight years. Their mutual infatuation with food helped bring them together, but started to weigh on them, literally. "After dating, we shared the same habits including eating … we ate out a lot and our weight started to increase," recalls Tsang.

Choi struggled to shake off the surplus pounds, losing weight with diet pills only to have it return. At her wedding in 2010, she tipped the scales at 91kg (200lb).

Meanwhile, the groom's weight had hit more than 95kg. "By then I developed lifestyle conditions like diabetes, high cholesterol and high blood pressure," Tsang recalls. Eventually his wife developed the same problems. The pair began taking daily medication to manage their chronic ailments.

Matrimonial bliss melted into contentment and they continued eating. For Choi, that meant wolfing down meat and three bowls of rice in a single sitting and drinking four colas with each meal.

There were constant reminders of their weight. On flights, Choi needed a belt extender. "I couldn't unfold the table because my body took up so much room," she says. Finding clothes that fit her was problematic. Eventually, she began to live a hermit-like existence, watching TV dramas and eating processed food.

"The more I stayed home, the more junk food I ate," Choi, an insurance company clerk, recalls. She eventually reached a weight of 111kg. 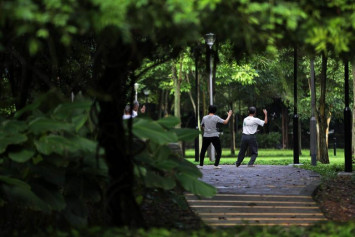 Tsang had also continued to pack on the pounds, reaching 113kg. He had no idea his body was signalling serious diabetic warnings - extreme thirst, blurred vision, chronic fatigue.

Obesity is associated with many serious health risks, including high blood pressure, diabetes and high cholesterol - conditions this couple developed. Other risks include breathing problems due to sleep apnoea, joint and bone problems such as osteoarthritis, and the increased likelihood of developing bowel and breast cancer, or having a stroke.

"Suddenly I thought I could die if my problem persisted," Tsang says on what shook him to change.

Choi was awakened from her food torpor when a former colleague nudged her to join a 10-day lean and tone challenge, which the friend, "Candy", went on to win.

The couple were initially dubious, but Choi trusted her friend and yearned for a social life."I didn't want to do it alone, so I begged Mick to come," she said.

In 2017, Choi and Tsang met Jane Fang, WXS Fit Club's healthy lifestyle and fitness coach (who has since moved to Canada). She laid out a strategy of gradual changes and improvements to help them stay motivated.

"There are so many changes one has to make, so instead of overwhelming them … my strategy was to do one thing at a time," recalls Fang.

They learned the "80/20" philosophy, that the fitness equation is 80 per cent nutrition and 20 per cent exercise. The couple's relationship with food began to change. Junk food was forbidden. That meant no more sugary drinks and lots of water.

The couple bade farewell to dining out, too. On weekends, they started doing meal prep to produce packed lunches for the upcoming week.

Breakfast was a nutritional smoothie with vegetables such as spinach and kale, for added fibre, to set a healthy tone for the rest of the day.

Having a support system makes all the difference when trying to sustain lifestyle modifications. Choi came to count on support from peers who were also participating in the club's challenges.

She took part in several that helped her find new friends and ultimately, happiness.

"Beside Candy, our new friends motivated me to stick to the nutritional habits and to start taking up sports and exercise," she says.

She became more accountable for her health. During weak moments, Choi could call on help. "I've got buddies that supervise me so I can't slack off," she says.

Her husband also gave her a nudge when needed. "For overweight people, doing exercises by yourself and changing these habits is quite boring and not fun, but with a bunch of buddies giving you positive vibes and a push, it makes the whole experience different," she says.

The pair stepped up their exercise, too: Tsang started jogging, while Choi preferred walking. Then they started swimming. They both joined Fang's more intensive boot camps.

Over time, the two joined a running club and began to train for longer distances. They competed in their first half marathon at the Geo Hero Run 2018 at Hong Kong's Unesco-listed geopark in Sai Kung in the New Territories.

Choi, who is 37, now has a routine that involves swimming, boot camp, and circuit training at a gym. Tsang, 42, is a gym hound, too, who takes part in running and boot camp.

Choi started her regimen weighing 107kg with a goal of losing 45kg. In 18 months, she has seen 34kg melt away and she aims to keep shedding the weight.

Tsang has lost 25kg in a year. Now his focus is on building muscle.

To the shock of their doctors, their health has improved to the extent that they no longer require daily medication.

"In a big city like Hong Kong, people are concerned most about working and making money over everything else, so you have to set your priorities to be healthy over everything," he said.

Initially, stepping outside your comfort zone to exercise can be tough, Tsang says, so he suggests changing your eating habits first. Then combine healthy eating with light exercise, he says. Don't dive into hard-core workouts, as your body needs to adjust to regular movements.

He rejects the biggest excuse he hears for not being physically active. "We all have time; even the 10, 20 or 30 minutes that people spend looking at their phones. Why not use that browsing or Instagram time to go for a run for 10 or 15 minutes, for your exercise for the day?"

Their transformation extends to their mindset, too. Choi, for example, feels stronger and more confident.

"I'm still working on my ultimate goal [to shed another 11kg], but I pinch myself that this is reality … it feels magical," she says. "Everything feels like a dream."