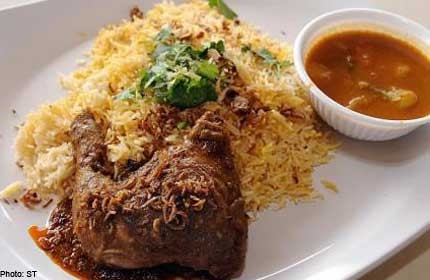 SINGAPORE - A healthier version of chicken briyani has become even more beneficial to the body.

To begin with, the dish of chicken and rice cooked in spices that is offered by Azizah in Geylang Serai Market and Food Centre is prepared in the Pakistani style.

This means it is whipped up using more tomatoes, fewer spices and less oil, said

Mr Noshad Yaqoob, 48, a Singaporean whose father came here from Pakistan and whose mother was Singaporean.

He runs the stall in the food centre at Block 1, Geylang Serai, off Sims Avenue, with his wife, Madam Sitara Jabeen Mohamed Miskeen, 43, who is from Pakistan.

Instead of following the traditional way of using ghee - which is high in saturated fat - Mr Noshad uses low-fat milk and yogurt.

This adds calcium to the dish and also reduces the amount of saturated fat.

When consumed, saturated fat is converted into low-density lipoprotein cholesterol, or "bad" cholesterol, which is distributed through the blood to tissues to make hormones.

When in excess, it is deposited on artery walls, narrowing the arteries and raises a person's risk of heart disease and stroke.

Consuming too much sodium has been linked to a higher risk of developing high blood pressure, which, in turn, increases a person's risk of heart disease and stroke.

This step makes it easier for the rice to absorb the low-fat milk, yogurt and the flavour of the spices, Mr Noshad said.

The rice was indeed moist but just slightly spicy and not oily - like the chicken curry.

The chicken was tender and tasty, and the dhal (lentil) curry complemented it.

Mutton briyani is also available at the same price.

Mr Noshad was prompted to switch to healthier ingredients because of his customers' - as well as his own - growing awareness of the importance of health. Both his parents had heart problems.

The father of five children aged between eight and 24 said: "In the past, people didn't care about salt and cholesterol. Nowadays, people are more health conscious.

"We want customers to eat healthily too. You need health, then you can earn money. If you are unhealthy, even having $10 million is of no use."

Going the healthy route has brought about a win-win situation - it has also translated into healthy sales.

Business has since grown by about 20 per cent, Mr Noshad estimated.

Get a copy of Mind Your Body, The Straits Times or go to straitstimes.com for more stories.