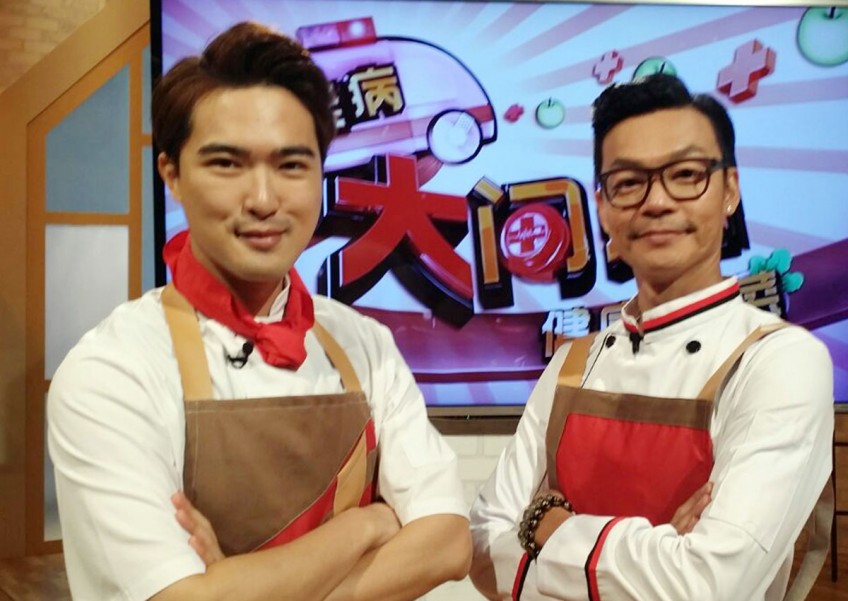 That was the media franchise that Body SOS, the popular Channel 8 health info-ed series, spawned after four years on the small screen.

But it was not just the viewers who benefited. Hosts Mark Lee, 49, and Lee Teng, 33, also picked up useful tips along the way.

The pair said they have, in their first collaboration, transformed from health klutzs to health experts who tend to share nuggets of information with the people around them.

While Lee, a comical father-of-three, admitted that he is still working on walking the talk, his younger and single co-star has been cutting down on his bad habits, such as sleeping late, while eating healthier.

WHAT'S THE APPEAL OF HOSTING BODY SOS FOR SO LONG?

Mark Lee (ML): When the producers approached me to host the first season with Lee Teng, I was like 'huh?' as medical-related variety shows are not my speciality.

But they told me not to fear - they will invite medical experts to come onto the show to share their knowledge. I just had to link everything together and make it more fun and interesting.

I have learnt a lot, especially about diabetes... the kind of food (patients) can eat and what may cause them harm.

ARE YOU HEALTH CONSCIOUS?

ML: I think it is hard to be health conscious, especially in this industry. I need to improve on that. The working and eating hours are not fixed - sometimes we have to stay up overnight.

If one wants to be healthy, it would be to drink more water.

But it is difficult for me, as I have been drinking kopi o (black coffee with sugar) since young. Even when I go for an outdoor shoot on a hot day, I will request for a cup of kopi o.

Whenever I have a three-day project, I always take along my Nespresso machine. I drink about 10 cups or more a day.

Lee Teng (LT): I used to have the bad habit of sleeping extremely late. If I do not have filming the next day, I will play online games until 7am.

It was only after filming Body SOS that I realised sleep deprivation can be fatal. It can cause your immune system to shut down, and you will fall sick easily.

From then on, the latest I would sleep is midnight or 1am but the best is still 11pm.

We invited several nutritionists on our show, and two years ago, I found out I had edema (swelling of the body).

I realised it might have something to do with my diet, such as eating food that was too salty.

I took about a year to lose weight. I cut down on sugar, fried food and supper.

I am also learning to drink coffee, because I realised that Mark eats a lot, but he is always slim. I later realised that it might be the coffee that increases his metabolism, so I started drinking coffee but not as much as him.

HAVE YOU BECOME HEALTHIER SINCE HOSTING BODY SOS?

LT: I have learnt to eat a balanced diet. As long as you do not go over a limit, I think it is fine. ML: I used to eat like I was eating at a buffet, and I would stop only when I felt very full. Now, I eat until I am 70 per cent full, then I add fruits or desserts.

I was surprised when a nutritionist told us it is better to eat fruits before a meal instead of the other way round.

LT: When I was losing weight, I told myself to stay away from canned drinks and drink fruit juice instead.

But I realised that if the juice was not freshly squeezed, the amount of sugar is about the same as canned drinks or even higher.

WHAT HAS BEEN YOUR BIGGEST HEALTH SCARE?

LT: When I was in secondary school, I tested positive for tuberculosis.

I had to go to the Communicable Diseases Centre and take medicine daily for a year. It was quite scary at that point in time, but after a year of treatment, I was cleared.

ML: I had a type of migraine that was not exactly curable. When I had a headache on one side, one of my eyes would be affected, and I would not be able to see. I would also puke whatever I eat or drink.

One of my most serious flare-ups was when I puked my stomach acid, experienced a full-body cramp and had to go to the hospital. That was the most torturous time ever.

When I was in the army, I was driving halfway when I realised that my migraine was coming on. I stopped the car and called for a buddy to come and assist me.

The only way to recover is to turn off the lights, get into a half-lying down posture and rest for a few hours.As I got older, the migraine stopped occurring.

This article was first published on Mar 27, 2017.
Get The New Paper for more stories.