How one night of bad sleep can increase Alzheimer's risk

You wouldn't think they had a problem in the bedroom, but Hollywood celebrities Mariah Carey, George Clooney and Jennifer Aniston have all admitted to suffering from insomnia at some point in their lives.

In a 2012 interview with The Hollywood Reporter, heartthrob actor Clooney revealed that he wakes up as many as five times a night, and in 2014, actress Aniston shared on The Dr Oz Show that if she wakes up at 3am she finds it hard to doze off again.

They aren't the only ones: Getting an uninterrupted six to eight hours of sleep is something many stressed-out and overworked Hongkongers struggle with. But before you think that the odd night of tossing and turning is harmless, consider recent research that found that even one night of sleeplessness could have a negative effect on your brain.

One small study, done by scientists from the National Institute on Alcohol Abuse and Alcoholism (NIAAA) in the United States, revealed that adults who experienced a single night of sleep deprivation showed an increase in levels of beta-amyloid plaque in their brain. Beta-amyloid is a metabolic waste product that is found in the fluid between brain cells. 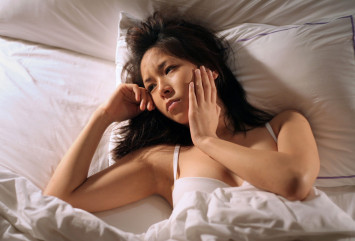 The accumulation of this sticky protein can disrupt communication between brain cells and has long been linked to the development of Alzheimer's disease, which is the most common form of dementia among older people. (The researchers pointed out that the increase in the plaque was not related to the genetic risk for Alzheimer's disease.)

The results of the study were published in 2018 in the Proceedings of the National Academy of Sciences.

Another study, led by researchers at Washington University School of Medicine in St Louis in the US, and published online earlier this year in the journal Science, found that sleep deprivation increases levels of the key Alzheimer's protein, tau.

A build-up of tau in the brain is one of the hallmarks of the disease - when it clumps together into tangles it can accelerate cognitive decline, as the clumps tend to emerge in areas of the brain important for memory before spreading to other brain regions. The School of Medicine study, which was carried out on both mice and humans, showed that sleep disruption causes this damaging protein to increase rapidly and to spread over time.

Tau is found even in the brains of healthy people. The protein is routinely released during waking hours as we work and go about our day, but when we sleep, release of the protein slows down and the tau that is present in the brain gets removed. What the researchers discovered was that sleep deprivation interrupts this process, thus allowing the protein to build up, increasing the likelihood of it clumping together.

Seeing as sleep deprivation is a problem in Hong Kong, and Alzheimer's is also on the rise in the city - it is estimated that a third of Hongkongers over the age of 80 will have dementia by 2050 - it's important to make a good night's rest a priority.

Besides increasing our dementia risk, even one night of poor quality sleep may affect us in other ways. Dr Kenneth Tsang, a consultant in respiratory medicine at Hong Kong Adventist Hospital, says that sleep deprivation may cause higher levels of anxiety, put us in a bad mood, and make it hard for us to focus. Sleep difficulties are also associated with psychiatric disorders like depression.

But that's not all.

"One large review linked insufficient sleep to an increased risk of obesity, possibly due to an increased urge to eat," Tsang adds. Other studies conclude that getting less than seven to eight hours of sleep a night increases one's risk of developing heart disease, stroke and diabetes. People with chronic inflammatory diseases such as rheumatoid arthritis and Crohn's disease also risk a relapse if they are sleep-deprived."

To get an uninterrupted night's rest, some of us may resort to taking prescription sleeping tablets or over-the-counter supplements like melatonin, lavender extract, magnesium or ginkgo. While there is nothing wrong with such sleeping aids, Tsang says we should not rely on them night after night. If you have trouble falling asleep or keep waking up in the night, it might be more effective to ask why and then work out how to address the problem.

1. Your room is too hot, cold, noisy or bright. Your bedroom should be like a cave - dark, quiet and a comfortable temperature, says Tsang. The best sleeping temperature for most adults is said to be between 15 and 22 degrees Celsius.

2. You napped for too long earlier in the day. Power naps of 10 to 20 minutes are recommended to rest our mind and body and help us stay alert for the rest of the day. But if you nap for long periods, especially to try and make up for a lack of sleep the night before, then you may find it hard to get a restful night's sleep, says Tsang.

3. You drank alcohol and/or caffeinated drinks earlier in the afternoon or evening. Drinking alcohol may induce sleepiness for a short period, but it may cause you to wake up suddenly during the night and make it hard for you to fall back to sleep. Tsang also suggests avoiding caffeinated drinks from late afternoon.

4. You used your smartphone, tablet or computer about an hour or two before bedtime. One study found that the use of portable light emitting electronic devices before bedtime prolongs the time it takes to fall asleep. It also delays the circadian clock, suppresses levels of the sleep-promoting hormone melatonin, and reduces the amount and delays the timing of REM sleep (Rapid Eye Movement sleep is said to be good for the brain). The results of the study were published in 2014 in PNAS.

5. You don't follow a strict sleep schedule. Waking up and going to sleep at the same time every day will make it easier for you to fall asleep and stay asleep throughout the night, says Tsang.

6. You have a medical condition that makes it hard for you to sleep through the night. If you continue to have persistent sleep problems, Tsang suggests consulting a doctor to rule out certain medical conditions, like depression, anxiety and sleep apnoea syndrome, which may lead to poor sleep. Sleep apnoea syndrome causes the sufferer to snore and wake up frequently during the night.

7. You exercised a few hours before going to bed. Exercise helps the body relax, but if you exercise strenuously three to four hours before bedtime, it might make it hard for you to fall asleep, says Tsang. Intense workouts increase the heart rate and body temperature and stimulate the nervous system.

8. You may also want to rule out insomnia, says Tsang. "People with this sleep disorder have difficulty falling asleep, wake up often during the night and have trouble going back to sleep, and feel tired when they wake up. If you have insomnia, your doctor may prescribe a night sedation treatment, which may be short- or long-acting."