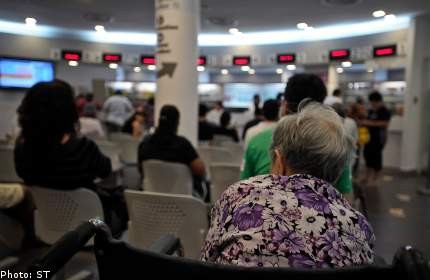 SINGAPORE - In response to the resounding success of its one-stop screening concept launched last year, Health Promotion Board (HPB) is now taking its integrated screening programme one step further - by streamlining three essential screenings in what is being dubbed as "Health Screening v3.0".

The screening for functional decline and chronic diseases and cancers will be combined into one, so as to give seniors a one-stop platform to access the full range of recommended health screening conveniently and affordably.

On-site follow-up will also be provided by healthcare professionals such as GPs, dentists, optometrists and counsellors.

Now, by streamlining the two screening processes, patients will only have to spend about two hours on a single day instead of four hours over two separate days, said Mr Ang Hak Seng, Chief Executive Officer of HPB.

Mr Ang said that seniors detected with functional decline and other health-related risk factors often skip their follow-up medical appointments after getting screened, likely due to the perceived inconvenience, costs and even fear.

"It is also worrying that our surveys show one out of five Singaporean seniors do not know they have hypertension, and two out of five - or about 40 per cent - do not realise they could be diabetic, simply because many of these diseases are often silent, giving no pain or symptoms until it is too late," he said.

The results so far in providing a one-stop screening process have proven rewarding.

The post-screening follow-up rate jumped almost fourfold to reach 90 per cent after consultation and management were provided immediately on-site to participants detected with age-related functional decline at its functional screening programme, HPB said.

In contrast, when on-site follow-up services were not provided, approximately three out of four seniors who needed follow-up did not visit their GP or other healthcare providers for further checks.

In addition to halving the travelling, waiting and screening time, Mr Ang said that it has also resulted in lower costs for set-up, registration and administration.

Such savings is passed to the seniors by keeping the cost of this 3-in-1 screening programme at $5, which is less than the $7 seniors had to pay previously to be screened for chronic diseases ($2) and functional decline ($5) separately.

HPB reassured those who cannot afford the costs that they will work with the community and grassroots organisations to provide further assistance.

The new initiative will be kick-started in Marine Parade, as about a quarter of residents here are more than 65 years old.

Members of the public can also look forward to interactive exhibition booths at the screening site as well as Health Ambassadors on sit to assuage any fears and clarify doubts.

By 2015, HPB aims to roll out its 3-in-1 enhanced screening programme to the rest of Singapore.