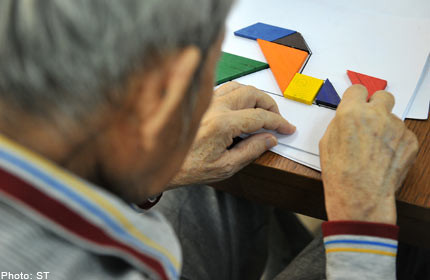 Patients with Alzheimer's disease, a major form of dementia, and their families struggle with a meager support system and the physical, psychological and financial burden imposed by the disease.

Family caregivers end up sacrificing themselves to fight against the disease without a cure. According to a report by the Ministry of Health and Welfare, about 534,000 people have dementia in Korea. The number is expected to reach 800,000 by the year 2020 and one million in 2050.

The number of people experiencing early symptoms of dementia is already growing quickly, among both young and old people. This means more dementia patients in the near future and more family members will have to watch their loved ones slowly lose their minds.

Neither the government nor society appears ready for this eventual reality.

More than one in four elderly citizens has shown a decline in cognitive function, a major indicator of developing dementia.

According to a report by the Korean Institute for Health and Social Affairs, 28.5 percent of 8,551 respondents aged over 65 had early signs of dementia.

There were more women respondents with cognitive impairment than men. Seniors in rural areas had a bigger dementia risk than those in cities, the report showed.

Another study showed that the incidence of early onset dementia is increasing at alarming rate. According to the state-run National Health Insurance, the number of premature dementia patients sharply increased from 4,055 in 2006 to 7,768 last year.

About 50-60 percent of early-onset dementia cases was Alzheimer's followed by frontotemporal and vascular dementia with 20 percent and 15 percent, respectively.

Doctors warned that a combination of genetic and socio-environmental factors involving heavy drinking and smoking may have caused premature dementia.

Doctors say it is important to check for risks of dementia in one's family history. Dementia screening is recommended if experiencing loss of memory, or difficulty in paying attention, language use or problem solving.

Early detection of dementia risks is important because there is no way to revive brain tissue if it starts dying.

"It is impossible to regenerate brain cells unlike other body organs. In other words, even if there are super drugs to cure the disease, there is no away to revive the already dead brain tissue. So, it is important to find what causes the disease as soon as possible and eliminate the causes first in order to prevent the disease," said Na Deok-ryeol, a doctor at the Department of Neurology at Samsung Medical Center.

The chances are quite low, however, that dementia is a curable disease.

The doctor stressed that to prevent dementia, one should never stop working.

Reading, being involved in community or religious groups and interacting with people may help avoid the silent killer.

"Don't leave them alone in the dark. Push them to get involved more in productive activities like volunteer work. There are reports that those who use full capacity of their brain they have a lower chance of dementia," he said.