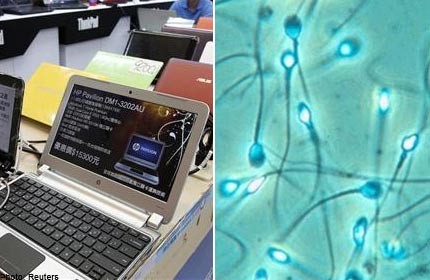 NEW YORK - The digital age has left men's nether parts in a squeeze, if you believe the latest science on semen, laptops and wireless connections.

In a report in the venerable medical journal Fertility and Sterility, Argentinian scientists describe how they got semen samples from 29 healthy men, placed a few drops under a laptop connected to the Internet via Wi-Fi and then hit download.

A quarter of the sperm were no longer swimming around, for instance, compared to just 14 per cent from semen samples stored at the same temperature away from the computer.

And nine per cent of the sperm showed DNA damage, three-fold more than the comparison samples.

"Our data suggest that the use of a laptop computer wirelessly connected to the internet and positioned near the male reproductive organs may decrease human sperm quality," they write in their report.

"At present we do not know whether this effect is induced by all laptop computers connected by Wi-Fi to the internet or what use conditions heighten this effect."

A separate test with a laptop that was on, but not wirelessly connected, found negligible EM radiation from the machine alone.

The findings fuel concerns raised by a few other research teams.

Some have found that radiation from cell phones creates feeble sperm in the lab, for example. And last year urologists described how a man's sitting with a laptop balanced on his knees can crank up the temperature of his scrotum to levels that aren't good for sperm.

So between the heat and the radiation from today's electronic devices, testicles would seem to be hard-pressed.

But that is not at all clear, said Dr. Robert Oates, who has managed to father two kids despite having both a laptop and an iPad.

The president of the Society for Male Reproduction and Urology, Oates told Reuters Health he doesn't believe laptops are a significant threat to male reproductive health.

"This is not real-life biology, this is a completely artificial setting," he said about the new study. "It is scientifically interesting, but to me it doesn't have any human biological relevance."

He added that so far, no study has ever looked at whether laptop use has any influence on fertility or pregnancy outcomes.

"Suddenly all of this angst is created for real-life actual persons that doesn't have to be," said Oates, also of Boston Medical Center.

According to the American Urological Association, nearly one in six couples in the US have trouble conceiving a baby, and about half the time the man is at the root of the problem.

While the impact of modern technology is still murky, lifestyle does matter, researchers say.

Earlier this month, a report in Fertility and Sterility showed that men who eat a diet rich in fruit and grains and low in red meat, alcohol and coffee have a better shot at getting their partner pregnant during fertility treatment.

"You should be keeping yourself healthy," including staying lean, eating healthy foods, exercising, not taking drugs and not smoking, agreed Oates.

And for those laptop worries, he mused, "I don't know how many people use laptops on their laps anyway."