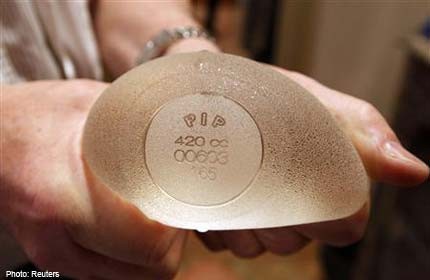 Fear and anger are growing among women with breast implants in Latin America, a key market for the bankrupt French firm that used industrial silicone to make cheap prostheses linked to health risks.

The implants at the center of the scandal were made by the now defunct Poly Implant Prothese (PIP) and appear to have an unusually high rupture rate, prompting French authorities to urge women to have them removed.

Some 300,000 PIP implants, used in cosmetic surgery to enhance breast size or replace lost breast tissue, were sold worldwide, tens of thousands of them in Latin America where demand for cosmetic procedures is high.

Colombian television presenter Alexandra Correa is desperate to know if her 10-year old implants are safe or not. She has been seeking an answer from her surgeon for the past few weeks but he hasn't returned her calls. Now he's on holiday.

"I'm so worried," said Correa, 32, who paid about $2,200 for her breast enlargements. "I can't leave my health to chance. Vanity comes at a price, but life is worth much more.

"It's preferable for women to have breasts the size of mosquito bites than larger ones ridden with cancer," she told Reuters on Monday.

In neighboring Venezuela, where implants are so popular they are sometimes even given to girls by their parents as a 15th birthday gift or as prizes in fund-raising raffles, there were frissons of anxiety among the many thousands of surgically enhanced women.

"I've had this prosthesis for nearly 10 years now, since my third child, and until now I'd always felt really good about it. It makes me feel young again, a woman not just a mother," said Martha, 47, a teacher who like many Venezuelans was relaxing at the beach with her family over Christmas.

"But since I've been reading all these stories about the French prostheses bursting and giving you cancer, I must admit it's awakened some fears. I've no idea what make mine are, but I'll be checking with my doctor as soon as I'm back in Caracas after the holiday."

France has been investigating possible links to cancer from the gel used in PIP implants but has found no evidence so far.

The PIP implants were banned in South American countries such as Brazil, Argentina and Colombia in 2010.

"I'm representing a group of 50 women, but there are more and more of us all the time," she told Reuters. "In some cases we've already settled out-of-court and the insurance of the surgeons who operated on us paid."

"Among my group, there are girls with ruptured implants, which causes a lot of pain and worry ... One of them had to take out a loan to have surgery again," she added, saying Argentina had imported 13,500 PIP implants.

Health authorities have urged concerned women to see their doctors, but some people are calling for authorities to do more.

Correa is angered by the lack of information available to women like her. Friends and family who have had breast enlargement surgery knew nothing about the problem until she advised them.

"There is a total lack of information in Colombia about this. Look on the Internet and there is virtually nothing there," she said.

"Every day, hundreds of women suspect they might have a problem with the prostheses and want them removed but the health insurance schemes refuse to operate if there's no concrete damage or risk, which underestimates the psychological issue," D'Alessandro said in a news report cited on his Twitter account.

"Authorizing the removal free of charge is a preventative measure that makes economic sense, avoiding future problems that could cost the health system millions," he said, adding that he was working on a bill proposing free removal surgery.

According to the International Society of Aesthetic Plastic Surgery, five Latin American countries -- Brazil, Mexico, Colombia, Venezuela and Argentina -- rank among the top 20 nations where most surgical procedures were carried out last year.

More than 25,000 PIP units were used in Brazil, which has a huge cosmetic surgery industry. Between 200,000 and 300,000 breast augmentation surgeries are carried out in the country a year, the Brazilian Plastic Surgery Society says.

Jose Carlos Daher, a plastic surgeon and founder of the Daher Hospital Lago Sul in Brasilia, acknowledged concern among women who had undergone surgery to have implants.

"They are very worried about what they are reading," Daher said, adding that he had never used PIP implants.

Surgeon Raul de Leon has been taking calls from worried patients at his clinic in an upscale neighborhood in Panama City, having to reassure them that he never used the PIP prostheses.

"In the last three or four years, I've had to remove two or three (PIP implants) because they've ruptured prematurely ... We've been following the trail of these implants for some time."

De Leon, president of Panama's plastic surgery association, said there might be between 50 and 100 PIP implant recipients in the Central American country, but that the number is difficult to ascertain due to medical tourism.

In Buenos Aires, long a magnet for medical tourists looking for affordable cosmetic surgery, one clinic offered free surgery to patients who want to replace their PIP implants, saying they would only have to pay for alternative implants costing between $500 and $1,000 per pair.

"Due to recent events ... that have caused panic among of dear patients, we've decided to work in solidarity with them," the Centros B y S said in a statement on its website.

But such offers do not go far enough for women like Luna.

"We bought a faulty product that is defective or risky and whoever sold it to us must take responsibility for that," said Luna, who has started a blog for affected women.

For Correa, she just wants peace of mind.

"I need to know if I have poison in my body or not."