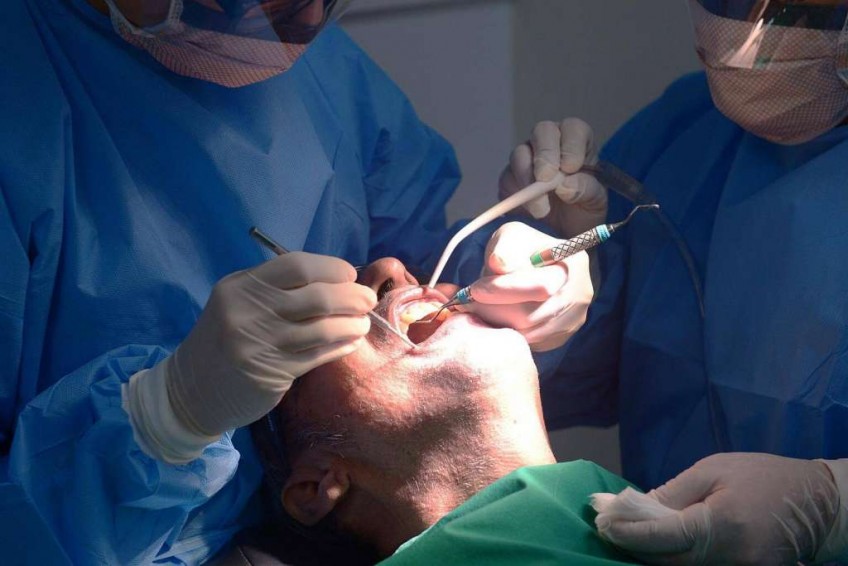 A patient having his teeth checked at the Geriatric Special Care Dentistry Clinic (GSDC) at National Dental Centre Singapore (NDCS).
The Straits Times

Demand for subsidised dental treatment is so much higher than dentists in the public sector can comfortably cope with, that patients could face waits of a year or more for treatment.

This includes treatment for serious dental problems such as periodontitis or severe gum infection.

Dr Poon Choy Yoke, director of the National Dental Centre Singapore (NDCS), said: "With a rapidly ageing population, the demand for age-related dental treatment such as dentures, root canals and fillings has increased."

The centre, which has eight periodontists, gets 150 referrals a month for gum treatments. Dr Poon said the average waiting time for a first visit is two to 5½ months.

An assessment is made and those who come in a diseased state are first stabilised, then therapy is carried out on subsequent visits, she explained.

Retiree Wilson Tan, 69, visited a dentist at Toa Payoh Polyclinic in February last year, when he was told he had periodontitis and needed specialist treatment.

Periodontitis is a serious gum infection that damages the soft tissues and destroys the bone that supports teeth. If left untreated, it can cause tooth loss or, worse, an increased risk of heart attack or stroke and other serious health problems.

Mr Tan was referred to the NDCS and, after a six-month wait, went for his first appointment in August last year, where X-rays were taken but no treatment was carried out. He was to return in three months for treatment to start.

But when he tried to make a follow-up appointment, he was told there was a long waiting list and he could not be given a date just yet.

He has called and e-mailed the NDCS several times for an appointment, but has yet to get a date.

An e-mail from the service quality section in November last year told him: "Most patients on this waiting list wait for about six to 10 months before treatment commences."

It added that, should his condition worsen, he should seek "a review appointment" and, in the meantime, arrange for routine six-monthly cleaning at a dental polyclinic or private general practitioner dental clinic before commencing his gum treatment at the NDCS.

He had thought of going to a private dental specialist, but it is very expensive, he said.

Dr Raymond Ang, chief operating officer of dental chain Q&M, said a week's wait is about the norm for periodontal treatment. The chain has more than 70 clinics and several periodontists.

Non-surgical periodontal charges range from $300 to $600 per quadrant of the mouth, with treatment taking more than an hour per quadrant, he added.

Although the Ministry of Health provides subsidies for pioneers like Mr Tan to get treated at private dental clinics, these do not cover specialist periodontic treatment.

Dr Ang said the claim amount for gum treatment is equivalent to scaling, which is $40 up to twice a year.

Said Mr Tan: "I am angry. What is the point of giving pioneers cheap and good medical and dental care with such long waiting times?"

When asked what was being done to address the long waiting times, Dr Poon told The Straits Times: "Recognising that this is an area of growing demand, NDCS is actively recruiting more to the speciality."

This article was first published on Mar 27, 2017.
Get a copy of The Straits Times or go to straitstimes.com for more stories.