Man drinks aged urine because it makes him 'healthier and smarter'

According to Business Insider, there are certain food items and beverages that can make us smarter, healthier and happier. This includes salmon, avocado, nuts, spinach, broccoli, berries, red wine, beans, dark chocolates, and cayenne pepper.

But even though these food items are reportedly healthy for us, there is a man from Sheffield, South Yorkshire, who believes that drinking a particular bodily fluid makes him happier and smarter.

This is the story of a 37-year-old man and Interior Designer, Fabian Farquharson who drinks aged urine on a daily basis.

Farquharson said that he started drinking urine 3 years ago since he experienced stomach pains. The doctors and medical scan results couldn't figure out what the issue was, so he started looking online. There, he discovered the supposed health benefits of urine.

He tells 9GAG, "I'd been researching alternative medicines when I read about drinking aged urine. I've always been open-minded about that sort of thing, so I decided to give it a go and drink it fresh. It tasted a bit like a bitter ale initially, it was quite strong but not a terrible taste and I had no problem finishing the glass. It was about half an hour later that I started to feel amazing, I was absolutely bursting with energy. Now I'd never go a day without it and would recommend it to anyone." 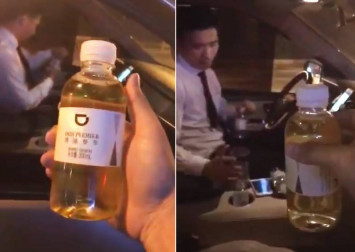 Rather than drinking coffee, tea, or a refreshing glass of water a day, Farquharson begins each morning with a pint of fresh and aged urine, followed by 300-400 mL of 'aged pee', which he claims makes him feel healthier, happier and smarter.

We all know that drinking urine isn't good for us as it contains waste products that have been filtered out from our bloodstream. And drinking it reintroduces concentrated waste products into your body and forces the kidneys to filter them out again - causing unnecessary strain.

There is no reason for you to think that drinking urine would benefit your health in any way, so don't be like Fabian Farquharson!