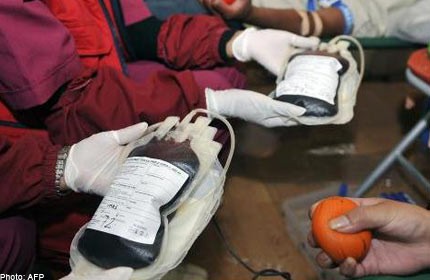 SINGAPORE - A 57-year-old man was jailed yesterday after it was discovered he had donated blood tainted with HIV.

The man, who cannot be named because of a gag order, had failed to declare on his donor health assessment form that he had recently slept with prostitutes.

HIV is a virus that causes AIDS, and can be transmitted through sexual intercourse and blood transfusion.

In a statement to the press, the Health Science Authority (HSA) said the man donated blood and his blood tested HIV-positive on Nov 21,2009. The blood was then immediately isolated and destroyed.

A check by HSA revealed that the man had made previous blood donations between July 20, 2008, and Aug 21, 2009. However, the blood donated then tested HIV-negative.

The case was reported to the Ministry of Health's enforcement branch for investigation on Jan 6, 2010.

It was discovered that around December 2007, the man paid for unprotected sex with Chinese prostitutes in Geylang, the investigation report said.

The man was charged with falsely declaring on his health assessment questionnaire that he had not visited prostitutes or had sex with more than one partner in the 12 months before his donation.

He faced two charges for the false declarations made on July 20 and Nov 7, 2008, and was sentenced to eight months in prison.

HSA reminded the public that every donor must truthfully answer the donor health questionnaire about their health, travel and sexual history. This assessment form, once submitted, is considered a statutory declaration.

HSA takes its responsibility to safeguard the national blood supply very seriously and has in place stringent measures to ensure patients are provided with the safest possible blood when they need it, the government body said.

In addition to the questionnaire, donors are required to undergo a screening process by medical personnel, who will run through with the donor the questions asked in the form. This is to confirm that the donor is aware and certain of his or her answers.

A 24-hour toll-free number is available for donors to call if they feel their donated blood is unsuitable for use.

All units of blood are tested for infectious diseases such as HIV, Hepatitis B and C, and syphilis.