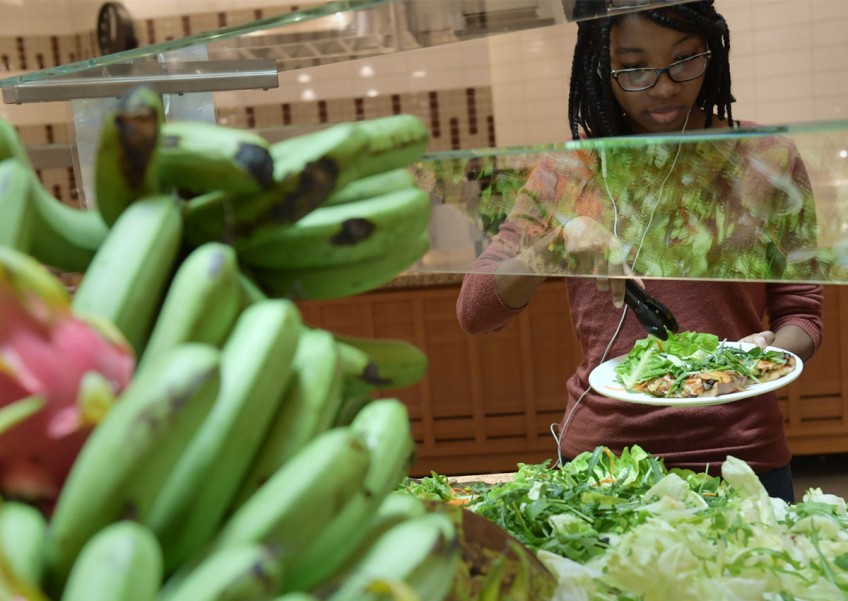 Student getting food from the salad bar at one of Yale-NUS campus' three dining halls, which have started serving fully vegetarian lunches once a week.
The Straits Times

A global initiative encouraging people to give up meat one day a week has been gaining momentum in Singapore.

The campaign, called Meatless Monday, began in 2003 in the United States before taking root in countries such as Australia and Belgium.

Singapore is getting in on the action too. In the past year, Kampung Senang, a charity and education foundation, launched Green and Healthy Monday, while Khoo Teck Puat Hospital (KTPH) and Yale-NUS College have also started promoting meat-free initiatives.

Several Facebook pages encouraging people to abstain from meat one day a week have popped up, though none are affiliated with the global campaign.

The motivations behind each campaign differ but organisers recognise the benefits of reducing animal protein intake or even cutting out egg and dairy products.

A research paper by the Academy of Nutrition and Dietetics in the US found that a vegetarian diet may provide health benefits for the prevention and treatment of Type 2 diabetes, heart disease and obesity.

Singaporeans love their meat, with each person wolfing down an average of 77kg of meat in 2015, according to the Agri-Food and Veterinary Authority. This is much higher than the global average of 41.3kg.

Going meatless also helps the environment. The meat industry generates high amounts of greenhouse gases, while 1kg of beef takes 15,000 litres of water to produce. This is nearly seven times the amount it takes to produce rice.

At Yale-NUS, the meatless initiative was spearheaded by the Yale- NUS Association for the Protection of Animals from Cruelty.

Its president Darrel Chang, 22, said it hoped to raise awareness of problems in factory farms. An environmental group and the college's South Asian society have also come on board for the push.

Starting this month, each of the college's three dining halls has been serving a fully vegetarian lunch once a week.

Mr Chang said his group tried to introduce the idea a few years ago but was unsuccessful. However, it now has the support of the new dean of students, who joined last year. Mr Chang said the new dean hoped the institution could make an impact and one way was by cutting its carbon footprint.

President of the student government Saza Faradilla, 21, describes herself as "quite omnivorous" but she chooses to have lunch at whichever dining hall is serving meatless meals for the day.

"The food is very different and healthy," she said. "I expected it not to be good but it turned out to be very good. It's guilt-free, so everyone wins."

Another student, Jessica Teng, 21, said the movement helps to expose students to the vegetarian diet.

"It's so easy. We have the salad bar and other good vegetarian options in school," she said.

When The Straits Times visited Yale-NUS, there were dishes such as pumpkin curry, kungpow tau kwa (tofu in a spicy sauce) and roasted cauliflower and eggplant.

But maintaining a meatless diet is more difficult outside of school because eating places often do not have good vegetarian options. "This is an important step to change the culture, but more needs to be done," said Ms Teng.

KTPH became the first local hospital earlier this month to start a campaign to promote the meat-free diet. At a three-day roadshow, 340 people pledged to reduce their meat intake.

Together with others in her department, she has also decided not to eat meat on Mondays.

Read also: Are you borderline diabetic?

Ms Cheng said: "It's something achievable, but it challenges me. I do enjoy meat but this expands my choices of protein intake."

Some restaurants here have also adopted the movement by offering discounts on Mondays.

Well Dressed Salad Bar and Cafe is offering a 50 per cent discount on selected meals and Eight Treasures Vegetarian Restaurant has a one- for-one offer for "sharks fin" soup. The fin is made of konnyaku jelly.

Both eateries are vegetarian and are managed by Eight Treasures Vegetarian Group.

And local bakery chain Cedele is offering customers $1 off their bill if they order meatless salads (with egg or cheese) or vegetarian salads.

Ms Tricia Lee, who is in her 40s, started a Facebook page, Meatless Mondays In Singapore, to localise the movement. "I wanted to share recipes and places to eat," she said.

Consuming too much meat can result in weight gain, high cholesterol levels, obesity and heart disease.

Those who are not ready to go meatless can choose healthier meat options. For example, to reduce fat intake, use lean cuts of meat or poultry without skin. And trim all visible fat before cooking.

Cook the meat using healthier methods such as grilling, steaming and boiling.

Ms Goh suggests cooking soups and stews ahead of time and refrigerating them. The hardened layer of fat can then be removed more easily.

Avoid processed meat like bacon, sausages and ham as they have a high salt content. Fish, which is low in saturated fat, is a good source of protein.

You can integrate alternative protein sources into your diet to meet the recommended protein intake, which is about 60g to 70g a day. Ms Goh suggests planning a menu for one week, scheduling one meatless meal and including healthy plant protein substitutes on that day.

Those on a vegetarian diet should note that some nutrients are found in much smaller amounts in plants, said Ms Hedy Cheng, a dietitian at Khoo Teck Puat Hospital.

However, many fortified products can provide nutrients like iron, zinc, calcium and vitamin B12. Soya milk, orange juice and cereals may contain these. Supplements in pill form are also available.