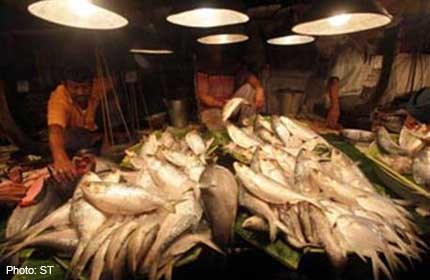 Once again, eating a diet based on fish, legumes, vegetables and moderate amounts of alcohol is linked to lower chances of dying from a heart attack, stroke or other vascular "events," according to a new study of New York City residents.

The mostly Hispanic and black study participants did not necessarily eat traditional foods from Mediterranean countries, but the closer their diets were to the spirit of Mediterranean eating - with plenty of fish, healthy fats like olive oil, whole grains and vegetables - the lower their risk of death from vascular problems including heart attacks.

"While it's not the Mediterranean diet, it is comparing a healthier diet to a less healthy diet, and there was some improvement," said Teresa Fung, a professor at Simmons College in Boston who was not involved in the study.

For nine years, Dr. Clinton Wright at the University of Miami and his colleagues followed more than 2,500 residents of northern Manhattan, a neighborhood with about 63 per cent Hispanic residents, 20 per cent African Americans and 15 per cent whites. Information about the health benefits of a so-called Mediterranean diet in the black and Hispanic populations in the U.S. is lacking, Wright's group notes in the American Journal of Clinical Nutrition.

Because both groups are burdened by high rates of heart disease, the team set out to study how much of a difference diet might make.

A little more than half of the study participants were Hispanic, while the other half was split roughly between non-Hispanic blacks and whites. All were over 40 years old when the study began.

At the outset, researchers asked participants about their health history, and ranked their eating habits along a nine-point scale: the higher the number, the closer the person's diet was to the Mediterranean ideal, with lots of fish, vegetables, legumes, whole grains and vegetable oils and very little meat or animal fats.

The group then tracked how many people later experienced a stroke, heart attack or death related to a vascular problem like pulmonary embolism and aneurysm. More than 300 people in the study died from a vascular issue.

Each point higher that a person scored on the nine-point Mediterranean diet scale reduced the risk of vascular death by nine per cent.

The study did not find that the diet had any effect on the risk of having a stroke, however. Among the 171 people who suffered a stroke, those at the high end of the diet scale were just as likely to have had one as those at the low end of the scale.

The researchers did detect slight protection from heart attack among those whose diets ranked in the top-four on the Mediterranean scale, but the finding could have been due to chance.

The results back up previous research that also reported benefits to heart health from eating a Mediterranean diet (see Reuters Health stories from March 7, 2011 and January 27, 2010).

The current study does not prove that diet is responsible for the benefits the researchers saw. But the Mediterranean diet is rich in elements like fiber and omega-three fatty acids, which could influence heart health, Wright said.

The evidence isn't conclusive, he added, but overall, the Mediterranean diet appears to be good for people's heart health.

"There's very little evidence to suggest that it's harmful compared to some other diets that we consider harmful, such as diets rich in red meat," Wright said.

"So it seems like there isn't much harm in it and there's increasing evidence that it's beneficial."