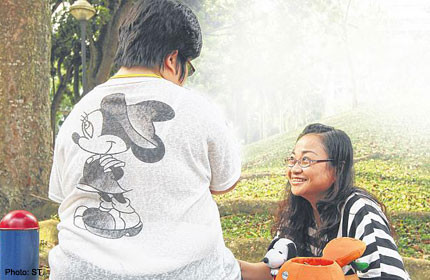 SINGAPORE - For more than three years, Madam Toh Siew Hong, 47, could make no sense of her daughter's inner world.

Known as Yanlin to close family members, the then-adolescent would try to hurt herself in ways that broke her mother's heart. She would hit her chest against cupboard doors, punch the mirror in the toilet and bite her arms till the tooth marks showed.

Whenever her request to leave the house was not granted by Madam Toh, she would try to open the gates of her 18th-floor flat, telling her mother she wanted to kill herself.

The mental instability was probably triggered by a move to another school and her new teacher's expectation for her to be more independent, said Madam Toh.

Yanlin was born with cerebral palsy, which affects her muscle control and coordination.

But as with up to half of such patients, her brain development was also affected, leaving her with mild intellectual disability.

Urged by the teacher at Yanlin's special needs school to discipline her for being "too spoilt", Madam Toh caned her daughter for the distressing behaviour, but it made no difference.

A neurologist eventually referred Yanlin to a doctor at the Institute of Mental Health (IMH). Though she received medication for impulse control, it did not help that she was allocated a different doctor every time she went to the general psychiatry clinic as she was a subsidised patient.

Things changed in 2011, when she was referred to the Community Wellness Centre, an IMH satellite clinic at Queenstown Polyclinic, where an Adult Neurodevelopmental Service had been started by Dr Wei Ker-Chiah, IMH's deputy chief and consultant in community psychiatry.

At this special clinic for intellectually disabled people with IQ levels of 70 or below, and who also have mental health problems, Yanlin is cared for by a team of health-care professionals who know her and have built a rapport with her.

These days, her daughter, who is now 24, is happier, said Madam Toh.

She no longer talks to herself for long periods of time and looks forward to attending the activity centre at the Society for the Physically Disabled each day.

The housewife said in Mandarin: "She often takes out her prized collection of whistles to touch now. Previously, she paid no heed to them."

During Yanlin's first visit to the clinic, she was seen by three experts - a psychiatrist, psychologist and occupational therapist - in a combined consultation.

Together, they identify the multifaceted causes of a patient's behaviour without delay. Previously, patients would first see a psychiatrist, who would refer them to other health-care professionals on separate appointments.

Often, it could take more than a month to see all three experts, which was not ideal, as treatment methods, such as medication and cognitive behavioural therapy, are optimal when done simultaneously.

The cost of treatment remains the same at the new clinic, starting from $106 for Singaporean subsidised patients, which is comparable with the combined costs of three separate consultations with three experts.

Yanlin was diagnosed by Dr Wei and his team as suffering from a major depressive disorder.

She was prescribed antidepressants and put through cognitive-behavioural therapy by the psychologist, which focuses on changing thought patterns that have a negative influence on behaviour.

On top of this, the occupational therapist planned activities that would occupy her, as well as meet her sensory needs.

Such an integrated specialist approach is advocated by the Royal College of Psychiatrists in Britain for people with an intellectual disability.

Studies comparing care by specialised and generic psychiatric facilities have shown better outcomes through the former: a decrease in psychiatric symptoms, an increase in overall functioning and an improvement in behavioural function.

A study by the IMH of 67 patients seen at the clinic at Queenstown Polyclinic, tracked at their first consult and again six months later, showed that patients improved by more than 20 per cent in the categories of behaviour and mental state, and to a smaller extent in cognition (7 per cent) and social functioning (8 per cent).

All the caregivers surveyed also said they were satisfied or very satisfied with the service they received in the special clinic.

Encouraged by the results, the IMH started a similar clinic at its own facility in Buangkok Green Medical Park last month.

Research has shown that people with intellectual disabilities are at an increased risk - about four to five times higher - of developing mental health problems.

These are also more common when the intellectual disability is moderate to profound than when it is mild.

The vulnerability is due both to the brain developmental disorders and intellectually disabled people's limited understanding of complex issues and reduced problem-solving skills, especially for resolving conflicts, said Dr Wei.

Social stigma and rejection, leading to more instances of abuse, can also tip them over the edge.

Dr Christopher Cheok, a senior consultant and head of the psychological medicine department at Khoo Teck Puat Hospital, said those with mild intellectual disability who go to mainstream schools may also suffer from low self-esteem from being at the bottom of the class.

There is no official data here on the prevalence of people with intellectual disabilities, though most overseas studies put it at around 1 to 2 per cent of the general population, said Dr Wei.

Epidemiological studies have found that 40 to 50 per cent of people with intellectual disabilities have mental health problems, including behavioural problems.

With the 5.3 million population in Singapore, it means as many as 21,200 to 26,500 intellectually disabled people will need access to mental health services at some point in their lives.

The Singapore Mental Health Study, in which 6,616 people were interviewed extensively by the IMH in 2010, stated that 12 per cent of people in Singapore will be stricken by mental illness in their lifetime. This does not include the risk of developing problem behaviour.

According to other studies, problem behaviour is the most common type of mental illness in people with intellectual disabilities, followed by mood disorders (depression and bipolar disorder), psychotic disorders and anxiety disorders.

Problem behaviour could be aggressive, sexually inappropriate, oppositional, demanding, self-harming or a tendency to wander.

Dr Wei said aggressive and self-injurious types of behaviour are most commonly seen in the clinic as they cause greater distress to caregivers.

Yet, problem behaviour is often not recognised as mental health disturbances which are treatable.

This is something the IMH team hopes to change through a year-long consultancy project with voluntary welfare organisations that serve people with intellectual disabilities.

A team of 15 comprising psychiatrists, psychologists, occupational therapists, nurses, case managers and a social worker, all trained in this field, runs the two special clinics and visits the selected voluntary welfare organisations.

The challenge of caring for this group of patients is that their cognitive deficits also mean they have communication difficulties.

Some are unable to speak, while those who can may not be able to describe their experience and feelings accurately. Others are suggestible and have a tendency to agree with whatever they are told.

Even psychiatrists may miss a diagnosis of mental illness that is masked by intellectual and communication deficits, Dr Wei said.

He cautioned that patients whose mental illnesses are not treated are often unable to access community resources such as vocational or day activity centres due to their challenging behaviour.

He said: "This leads to a deterioration in their habilitation skills, possible irreparable breakdown in relationships with caregivers and rejection by family members."

Early intervention can thus prevent caregiver burnout and social rejection of the patient, which demoralises the patient, he said.

Get a copy of Mind Your Body, The Straits Times or go to straitstimes.com for more stories.