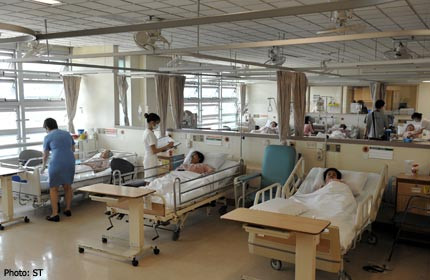 Between 2007 and last year, the number of people staying in them went up by almost 21,000 - a 17 per cent rise. By contrast, there was only a 3.7 per cent increase in demand for the more expensive B2 subsidised wards during the same period.

Possible reasons include a blurring of the line between the two classes, in terms of factors such as furnishings, and the introduction of means testing, prompting more to go for the cheaper option.

The difference in cost between C and B2 wards can be significant.

For example, B2 patients undergoing a heart angioplasty to open up narrowed blood vessels at Tan Tock Seng Hospital pay a median price of $7,188. C class patients pay $6,005, while the median price for those paying in full in A class wards is $14,498.

In the past, C class wards had a lot more people sharing a room than in B2 - up to 12 or more. But with greater concern over infection control, the numbers in a C class ward have come down, sometimes to as few as five per room. A B2 ward has five or six beds.

Alexandra Health group chief executive officer Liak Teng Lit said: "Most patients don't see any difference between the two. The fittings, etc, are about the same."

He added that demand for subsidised beds at Khoo Teck Puat Hospital, which his group runs, "is always above 100 per cent". When that happens, patients are placed in a higher-class bed but charged at the rate of the class they had asked for.

With the start of means testing in 2009, 15 per cent of subsidised patients are not eligible for the full subsidy.

Slightly more than one in 20 subsidised patients are permanent residents (PRs), who pay significantly higher fees than Singaporeans.

This is part of the Government's move to sharpen the distinction in benefits given to citizens. There will be one more round of cuts in April. With that, subsidies for PRs will be 25-39.5 percentage points less than for Singaporeans.

But the lower subsidy is not a problem for Mr Chong Yuen Chuen, 35. His wife of seven years, a Thai national who is a PR here, suffers from leukaemia.

Her five sessions of chemotherapy in a B2 ward at Singapore General Hospital came to more than $15,000. But he has two medical insurance schemes for her, and needs to pay only 10 per cent of the bill.