Need a massage? Meat cleavers used to 'chop' your aches away

A knife massage session in Malaysia.

While the normal reaction to being approached by wielders of multiple knives is to run far, far away, there are some people who would pay to be pummelled by knives.

An ancient therapy involving meat cleavers as massage tools has proven to be a hit in Taiwan, according to recent reports in Daily Mirror and Daily Mail

While this isn't the first time we've heard of the strange practice, the trend appears to have resurfaced, and has also been found in other places like Thailand and Malaysia.

Dating back around 2,500 years, the method known as 'dao liao', or 'knife therapy', has its origins in China.

According to Hsiao Mei Fang, the owner of Ancient Art of Knife Therapy Education Centre, in Taipei, Taiwan, "Monks learned this to protect themselves, it's like a practice."

So how does it work?

After sharpening her tools, Hsiao uses a stick to loosen up the blood vessels and to improve the circulation of the client before moving onto the massage itself.

Read Also
Slap your face to perfection for $425 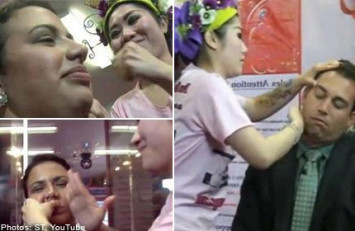 Then, sharpened cleavers are pressed in rhythmic motions into the body with nothing but a thin piece of cloth between the patient and the blades, according to the Mirror.

Hsiao, who has been performing the procedure for more than 13 years, explains: "The massage changes the energy inside the person and makes them more relaxed."

"Everything has a Yin and a Yang, so instead of using one knife we use two - this represents the Yin and Yang."

But rest assured, the knives are specially made so that they are safe to use on patients. "We wouldn't use a kitchen knife to do this," she said.

Clients seem hesitant at first, but are often pleasantly surprised.

In fact, according to an LA Times report, people have been known to fall asleep on the massage table.

In an interview with CatersTV, one person shared: "At first, I was so scared because we use knives for cutting chicken and pork meat. I was afraid of being cut like that too. However, after I tried a knife massage, I realised it was safe and actually quite comfortable."

Read Also
Snakes alive! Is this a spa

Another woman describes the experience: "It feels like electricity going through my body. My hips and lower back do feel much better now too."

Hsiao remarked that the massage can be life-changing: "A lot of people think it's just for fun but people don't realise this will change their lives. After they have experienced it they tell their friends and they all come to us."

But, the energy-changing massage wouldn't be complete without an additional quirk.

According to an article from StoryTrender: "In the midst of the massage, the masseuse makes a burping sound, which is apparently them spitting out the bad energy they draw from the client."

For those brave enough to experience the bizarre yet relaxing chop-chop of cleaver massage therapy, treatments start from around £30 (S$53).

Just don't try it at home.