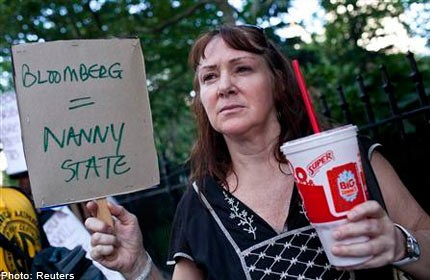 NEW YORK - New York City passed the first US ban of oversized sugary drinks on Thursday in its latest controversial step to reduce obesity and its deadly complications in a nation with a weight problem.

By an 8-0 vote with one abstention, the mayoral-appointed city health board outlawed sugary drinks larger than 16 ounces nearly everywhere they are sold, except groceries and convenience stores. Violators of the ban, which does not include diet sodas, face a US$200 (S$244) fine.

Opponents, who cast the issue as an infringement on personal freedom and called Mayor Michael Bloomberg, who proposed the ban in May, an overbearing nanny, vowed to continue their fight. They may go to court in the hopes of blocking or overturning the measure before it takes effect in March.

"It's sad that the board wants to limit our choices," Liz Berman, a business owner and chairwoman of New Yorkers for Beverage Choices, a beverage industry-sponsored group, said in a statement. "We are smart enough to make our own decisions about what to eat and drink."

On Twitter, Bloomberg heralded the measure's passage as "the single biggest step any gov't has taken to curb #obesity. It will help save lives."

Health Commissioner Thomas Farley said the measure was likely to be copied elsewhere in the nation - and even the world - as were the city's restrictions on trans fats and smoking.

Farley recently said if the law results in "shrinking only one sugary drink per person every two weeks from 20 ounces to 16 ounces, New Yorkers could collectively prevent 2.3 million pounds gained per year. This would slow the obesity epidemic and prevent much needless illness."

Kelly Brownell, director of Yale University's Rudd Center for Food Policy & Obesity, said there was "quite a good chance" that other US cities would once again follow New York's lead and replicate the idea that triggered opponents' outrage and doubts about the Bloomberg's leadership.

"It doesn't seem so crazy any more. You need somebody to go first," Brownell told Reuters.

Claiming the ban will hurt small businesses, opponents cited a recent poll by the New York Times, which reported 60 per cent of New Yorkers believe the ban is a bad idea.

But the Health Department said on Thursday that most of the extraordinary response it received to the initiative - 32,000 of nearly 39,000 oral and written comments - favored the restriction.

Board members rejected opponents' claims that they merely rubber-stamped the latest Bloomberg initiative, saying they discussed the issue at length and felt obligated to take what board member Dr. Deepthiman Gowda, an internist who teaches at Columbia University, called "a small step but a bold step and an important one."

Gowda and fellow board member Susan Klitzman, director of Hunter College's Urban Public Health Program, said they worried that the city was becoming acclimatized to the problem of excess weight.

"I see the crisis every single day and I feel to not act would be criminal," Klitzman said.

The board member who abstained from the vote, Dr. Sixto Caro, an internist, said he did so because he was not convinced a ban would make a difference in fighting obesity.

About one-third of Americans are obese, and about 10 per cent of the nation's healthcare bill is tied to obesity-related diseases, such as Type 2 diabetes, heart disease and hypertension, according to the Organization for Economic Co-operation and Development.

According to the most recently available data from The Centers for Disease Control and Prevention, obesity rates among Americans continue to rise. The OECD projects more than two out of three people will be overweight or obese in some developed countries by 2020.