No to lipo? Try fat-freezing instead 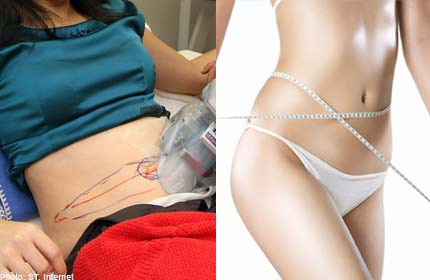 No to lipo? Try fat-freezing instead

SINGAPORE - If the recent media storm on invasive aesthetic procedures gone wrong has turned you off liposuction, you might want to try a new fat-busting treatment in town.

Cryolipolysis, a non-invasive procedure that freezes off fat cells, is gaining popularity over liposuction in Singapore, The Straits Times (ST) reported.

A quick check by ST with five general practitioners (GPs) offering both liposuction and cryolipolysis found that more than three-quarters of patients looking for a fast fix to a slimmer figure have opted for cryolipolysis.

The fat-freezing procedure extracts thermal energy from the area through probes, and is used to remove pockets of fat in the body which are difficult to remove by exercise or diet.

These areas include arms, abdomen, flanks, thighs, back and buttocks.

Dr Joseph Yang, a GP of a private practice at Wisma Atria, told ST that fat cells are more susceptible than other body structures to damage from cold. The exposure of fat cells to extreme cold may induce a biological process known as cell suicide, he said.

After the fat cells die, they are absorbed by white blood cells and broken down by the liver. They are then removed from the body as waste materials, said Dr Calvin Chan, a GP at Wheelock Place.

20 per cent reduction in fat

As the whole process may take months, the results may not be visible at first.

Dr Elias Tam, a GP at Heeren, is one doctor who brought in the new treatment and has since stopped offering liposuction.

Doctors ST spoke to who bought the machines, which can cost more than $100,000, said they did so as clinical studies into a cryolipolysis machine showed a 20 per cent average reduction of fat in the treated area.

Since May last year, when the first cryolipolysis made its appearance in Singapore, more than 20 clinics have imported similar fat freezing machines.

A cryolipolysis treatment may be followed by shockwave therapy, which delivers pulses of sound waves to the area to pulverise frozen fat cells so the body can pass them out.

The cryolipolysis and shockwave machine, called Proshockice, is being used by seven clinics, ST reported.

A 30-year-old housewife, who paid $12,000 for three sessions of cryolipolysis totalling eight hours, told ST that she now has a body that looks better in her favourite dresses.

She described the treatment to be a little painful for the first five minutes, after which the pain stopped. During the treatment, she sat in a chair with a device that brought temperatures in her abdomen, back and thighs down to four deg C.

An area slightly larger than the size of an iPhone would be targeted each time for about an hour.

Previously, she had liposuction done on her arms, abdomen, back, thighs and buttocks, which amounted to a total of near $40,000.

She decided to opt for cryolipolysis after she gained 6kg after giving birth for the second time.

However, even after three treatments, ST reported that the unnamed housewife had not dropped a dress size. No visible results were documented through before or after photos either.

Dr Tan Ying Chien, a plastic surgeon at Novena Medical Centre, warned that patients who opt for non-invasive procedures such as cryolipolysis should not have overly high expectations for the results.

Unlike liposuction, which is more predictable and well-tested, the 20 per cent reduction in fat shown in clinical studies is only an average, and patients should expect varying results, he said.

He added that another non-invasive fat-busting option is available in the form of ultrasound technology.

Studies have found it produces an average of 2cm shaved off the circumference of the treated area after one session, and 4 to 7cm shaved off after three treatments.

Dr Tan said he advises his patients on which fat-busting method to take based on how much fat they want to lose and how high a risk they are willing to bear.

Mr Heng, 44, died in 2009 after a botched liposuction procedure, in which he suffered punctures to his intestines and stomach and never woke up.

Cryolipolysis does not break the skin and doctors say short term studies have uncovered no real health risks.

At most, patients may experience broken capillaries from the suction action of the device and numbness of the treated area for up to a few weeks post treatment.

A study published in Aesthetic Plastic Surgery in 2008 reported that subjects who underwent fat-busting procedures using a fat-freezing machine experienced a reduction in sensation to touch, temperature or pain in the treated areas for a period ranging from one to six weeks.

On the other hand, liposuction, which involves surgery to insert a metal tube to suck out fat cells, can result in fatal complications such as blood clotting in the lungs or perforations of the abdominal organs.

However, with cryolipolysis, the risk is so low that some doctors say they allow clinic staff with no medical training to administer the treatment under supervision.