No softening of anti-drug war: DPM 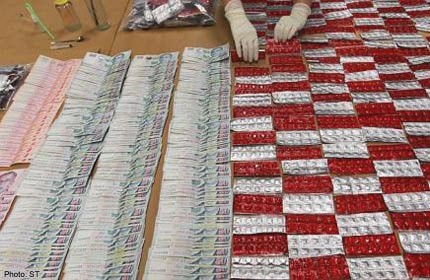 No softening of anti-drug war: DPM

SINGAPORE - Singapore's move to introduce changes to its mandatory death penalty for drug offences will boost its agencies' ability to fight the growing scourge both at home and abroad, said Deputy Prime Minister Teo Chee Hean.

With the changes, agencies like the Central Narcotics Bureau (CNB) will be better able to get more information from drug mules, he added.

The reason: These criminals will be spared the gallows only when their information leads to the arrest of drug traffickers or the destruction of a syndicate.

"We believe that the measures strike the right balance given the current operating environment," Mr Teo said.

He made these points on Tuesday when he emphasised that the proposed changes to the mandatory death penalty for drug traffickers are not a sign that Singapore is softening its legendary zero tolerance of this longstanding menace.

Over the years, Singapore's enforcement efforts have helped to curb the supply of recreational drugs here, pushing up the street price.

"Our firm stand against drugs has helped us to keep drug abuse under control, at a time when other South-east Asian countries have seen their drug problems worsen significantly," he said.

But the drug scene has worsened in recent years.

Singapore is in close proximity to major sources of supply, with greater quantities of heroin and methamphetamine being trafficked through South-east Asia.

Clandestine methamphetamine laboratories have also sprouted up in neighbouring countries, such as Malaysia and Indonesia.

In addition, leaders of drug syndicates have moved their operations abroad, making it harder for enforcement agencies to arrest them.

Hence, the emphasis on "substantive assistance" from the drug mules in order for the CNB to reach the higher echelons of drug syndicates, said Mr Teo.

It was the top concern of many of the 16 MPs who spoke during the four-hour debate on the Misuse of Drugs (Amendment) Bill.

Lawyer Christopher de Souza (Holland-Bukit Timah GRC), warning of the danger of signalling that Singapore has gone soft on drugs, said: "We mis-step, we open the flood gates, our war on drugs falters."

But the stringent conditions that drug mules have to satisfy to get life imprisonment means not many more will escape the gallows, Mr Teo assured MPs.

"Assistance which does not enhance the enforcement effectiveness of the CNB will not be sufficient," he added.

MPs pointed out the contradiction in the condition, arguing mere couriers would not have enough information to qualify.

Many asked the Government to consider a less onerous approach, with some proposing that the sheer willingness to cooperate fully should suffice, regardless of the outcome.

Others argued that sticking to the strict definition would penalise those low down in the command chain and who are, therefore, less culpable.

Besides the death penalty, the Bill has four other key amendments.

These include stiffer penalties for drug pushers who target the young and vulnerable, and even those who organise drug parties.

Taken together, DPM Teo said, these measures will send a strong deterrent message while increasing the effectiveness of the CNB.

"They strengthen our ability to curb the demand for and the supply of drugs, in particular our ability to act against and deter those who target the young," he added.

The debate resumes in Parliament tomorrow when Mr Teo will reply to MPs' concerns and suggestions.