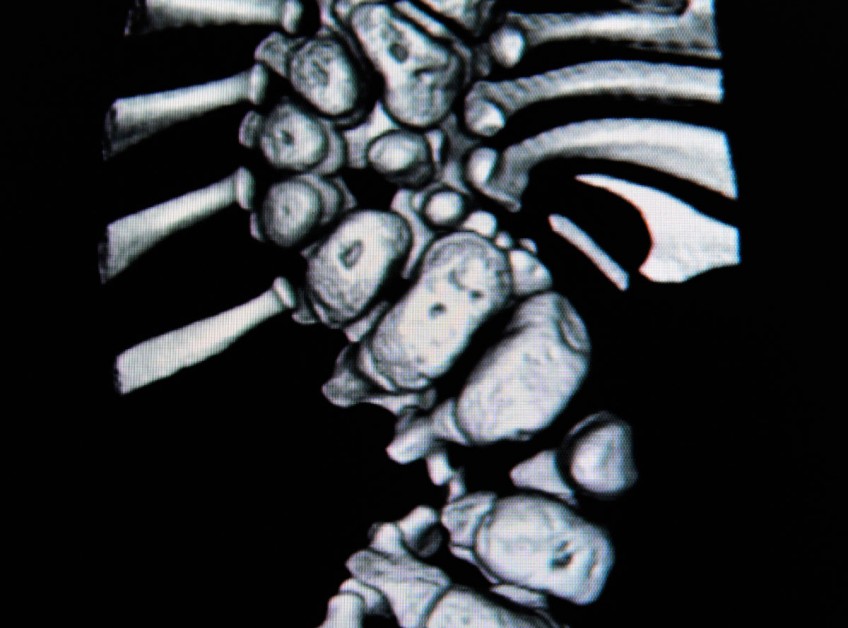 When Xiao Qiang got married at his home in Zhengxing town, Chongqing municipality, last month, the 32-year-old was happy to have proved the doctors wrong.

Xiao was born with severe scoliosis, or curvature of the spine, and had been told from an early age that there was no cure.

Scoliosis is classified as a severe condition, and potentially damaging to a patient's lungs and heart, if the spine's curvature exceeds 100 degrees. Xiao's spine deviated from the norm by 190 degrees.

"I'd had it since birth," he said. "Surgeons in many major cities had told me there was no cure.

"Then, in March 2013, I went to No 3 Hospital in Chengdu, where doctor Liang Yijian treated me for two and a half years. Now I look normal when I wear clothes."

Liang, head of the hospital's orthopedics department, inserted four metal rods into the upper part of Xiao's torso to form a brace that helped straighten his back.

"The bars pulled my spine back into shape, and after two years the curvature was reduced to 70 degrees," Xiao said.

Liang then operated on Xiao to remove any protruding bones, without touching the spinal cord. After the operation, the curvature of Xiao's spine was less than 50 degrees.

Before undergoing treatment in Chengdu, Xiao had visited 27 leading surgeons in different parts of the country.

He found that most did little more than remove patients' rib bones to achieve a reduction in spinal curvature, and could only offer him a 40-degree reduction at best.

"Their goal is to stop the bones from damaging a patient's lungs and heart. Doctor Liang uses metal bars to pull the spine into shape before he operates. His methods can solve a patient's problem once and for all," Xiao said.

Nearly 1,000 patients with severe scoliosis have benefited from Liang's innovative methods, according to Liao Guanghua, an information officer at the hospital.

Liang was born into a coal mining family in Chongqing. His father was injured numerous times in mining accidents before dying from a brain tumour when Liang was just 11. These early experiences encouraged Liang to become a medic.

He graduated from the Chengdu Institute of Traditional Chinese Medicine in 1986 and has been an orthopedist for 30 years.

"Out of every 1,000 Chinese, three suffer from curvature of the spine," Liang said.

"Most of them live in rural and less developed areas with limited access to information. When they eventually seek treatment, they are often already very sick."

Treatment for scoliosis is most successful when performed on juveniles. However, many of Liang's patients are age 20 to 30.

There are 90 beds for scoliosis patients on his ward, which are always full, he said.

Only four surgeons, including Liang, are qualified to operate on scoliosis patients at the hospital. An operation can last up to seven hours.

For Liang, it is his patients' desire to survive and lead a normal life that inspires him.

One such patient was a taxi driver in Wuhan, Hubei province, who was 37 at the time.

In 2010, he sought Liang's help after having suffered from curvature of the spine for 20 years following a bout of myelitis in his teens.

The man was too embarrassed to collect his nine-year-old son from school, in case the boy's schoolmates saw him. He was concerned it might give his son an inferiority complex.

"To help patients like him, I would like to carry on and be a surgeon for as long as possible," Liang said.